Tampa Bay earned its first-ever Presidents’ Trophy, and Steven Stamkos set a franchise-record for the most goals in team history as the Lightning beat the visiting Arizona Coyotes 4-1 on Monday night.

Victor Hedman’s goal in the first minute of the third period broke a 1-1 tie, and Tampa Bay’s top-ranked penalty-kill held Arizona scoreless with the man advantage in the game’s last 1:39.

Anthony Cirelli, who had an assist, and Yanni Gourde each had short-handed empty-net goals in the final minute.

Stamkos scored the game’s second goal of the first period. His 384th career goal broke the franchise record for goals previously held by Vincent Lecavalier, who was a member of the Lightning for 14 seasons.

The Lightning, who improved to 31-6-2 on home ice, clinched the Presidents’ Trophy for the first time in club history, securing the No. 1 seed in the post-season.

They became the second-fastest ever to notch the award, doing it in their 73rd game. The 1995-96 Detroit Red Wings did it in 71 games. 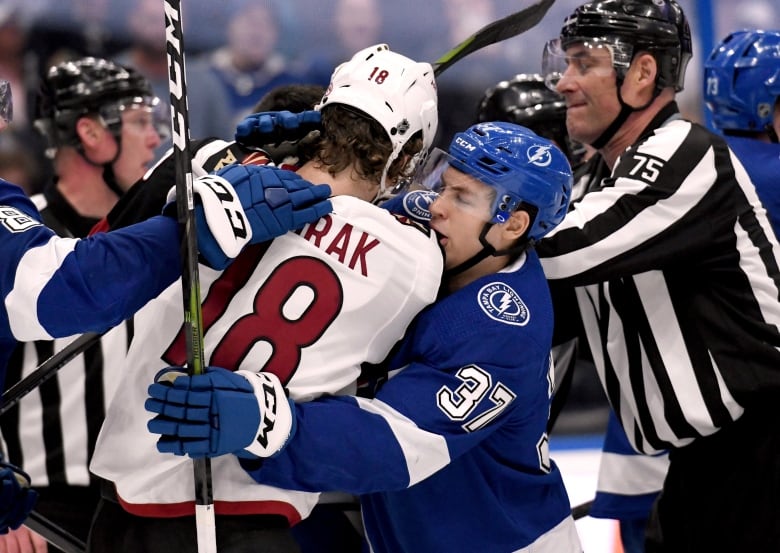 Lightning goaltender Andrei Vasilevskiy stopped 28 shots to win for the 14th time in his last 15 starts and had an assist on Gourde’s marker.

Clayton Keller scored, Richard Panik and Christian Dvorak had assists, and goalie Darcy Kuemper made 20 saves for the Coyotes, who are 4-2-1 in their last seven.

Keller, a 23-goal scorer last year as a rookie, tallied for just the third time in his last 25 games, giving Arizona a 1-0 lead at 5:03 of the first period.

Richard Panik stole the puck on a forecheck in the Arizona offensive zone and quickly whipped the puck over to Christian Dvorak, who set up Keller in the slot for his 14th goal.

Battling for position with Arizona’s Mario Kempe in front of Kuemper less than two minutes later, Stamkos deflected in Ryan McDonagh’s long shot for his record-setting goal and 36th this season to make it 1-1 after 20 minutes.

Hedman gave Tampa Bay its first lead just 44 seconds into the third period. Cirelli grabbed a rebound and flipped a pass over to the Norris Trophy-winning defenceman, who potted his 10th goal.