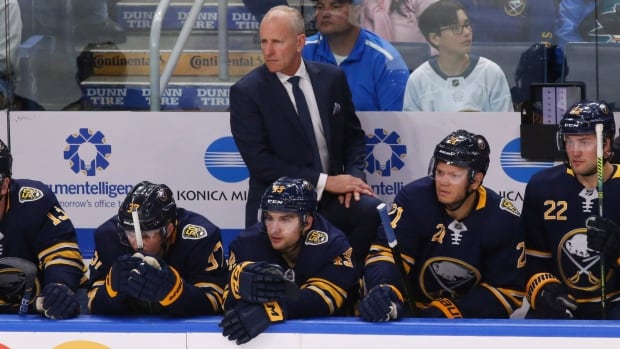 Joe Thornton’s eyes lit up when the conversation pivoted to Ralph Krueger.

“Just a fantastic guy,” said the veteran centre. “Just a phenomenal guy to be around.”

The two go back 15 years to when Thornton was riding out the first NHL lockout playing in Davos, Switzerland, and Krueger was head coach of the country’s national team.

“You can feel it … he just has this presence,” Thornton added. “You want to be around a guy like that.

What Krueger has right now is the Buffalo Sabres atop the NHL standings at 8-1-1 following Tuesday’s 4-3 overtime victory against Thornton’s San Jose Sharks.

Hired as the franchise’s 19th coach in May to replace Phil Housley, the 60-year-old has implemented an up-tempo, offensive brand his players have latched onto early.

Krueger is open to new ideas and wants feedback.

“He’s definitely respected the guys in the room and our opinions,” said Sabres captain Jack Eichel, who leads the team with 14 points. “It’s just the overall connection. He’s done so much to get us to buy into what he’s saying … it’s his delivery, it’s his message, it’s the energy he brings. He’s such a positive person.

“When you’re around that, it makes you want to be better for him. He just does a really good job of bringing out the best in people.”

Getting a message across when you’re winning, of course, doesn’t hurt either.

“This helps to confirm that we have a plan that can work,” Krueger said before the San Jose game. “Nothing ever replaces winning.”

But the majority of these Sabres have seen a run like this before. Buffalo led the NHL with a 17-6-2 record on Nov. 27, 2018, following a 10-game winning streak before losing 41 of its next 57 games to miss the playoffs for the eighth straight season.

That’s why the players aren’t getting ahead of themselves, but also aren’t concerned about a potential collapse with Krueger at the helm.

The Sabres captain gets the go-ahead goal against the Montreal Canadiens on Wednesday. 0:29

With a long, eclectic resume, Krueger isn’t afraid to work outside the box.

“We don’t really operate on anything traditional here,” said the native of Steinbach, Man. “We’re trying to operate on what we think is best for the Buffalo Sabres today, and then tomorrow, and then the next day.

“I’m not really interested in norms and that kind of decision-making.”

Sabres goalie Carter Hutton, who’s 6-0-0 with two shutouts, a .943 save percentage and a 1.65 goals-against average, said this season simply feels different. Buffalo’s 10-game winning run in 2018-19 was largely a mirage, with seven of those victories coming after regulation, including three in a shootout.

“We weren’t playing the right way,” Hutton said. “It’s more about our structure than anything. Last year we just didn’t have that … that’s what we’re trying to find.”

Sabres general manager Jason Botterill has liked what he’s seen so far under Krueger, and the roster’s willingness to jump on board.

“Ralph has brought in a clear message and has done a great job in communicating with our group,” Botterill said. “But I also think our players have been very open to it.”

Krueger’s journey back to the NHL has been well-documented. He had a cup of coffee behind the Edmonton Oilers’ bench in the lockout-shortened 2012-13 season, but has largely seen his professional success come outside North America.

He was a mainstay with the Swiss program, led Team Europe to a surprise second-place finish at the 2016 World Cup of Hockey and spent the last five years running soccer’s Southampton of the English Premier League.

“When he talks, guys are going to listen no matter what he’s talking about, whether it’s hockey or life,” said Sabres centre Sam Reinhart. “We’ve really been enjoying our time with him so far and doing what we can to learn.

“He’s done a good job of getting everyone on the same page.”

But Eichel cautioned it remains a work in progress.

“We’re continuing to get closer as a group off the ice and continuing to learn more about ourselves as a team on the ice,” he said. “It’s a process. It’s not one that’s going to be done tomorrow or next month.

“We’re just trying to continue to evolve the whole year and become the best team we can be.”

The Maple Leafs sit a pedestrian 5-4-1 through 11 games following Tuesday’s 4-2 defeat in Boston, a result that came on the heels of a blown third-period lead at home in Monday’s 4-3 overtime loss to Columbus. Worrying trends stretching back to last season continue to dog Toronto, including defensive miscues and a lack of focus. Star centre Auston Matthews was blunt in his assessment Tuesday night: “It’s just not good enough … I need to be better. All of us need to be better.”

Bo Horvat grabbed Vancouver by the scruff of its neck Tuesday, leading a five-goal third-period barrage with his first NHL hat trick in the Canucks’ 5-2 comeback victory in Detroit. Named the team’s captain Oct. 9, Horvat had one assist through five games, but scored five times on Vancouver’s just-completed 3-1-0 road trip.

Washington’s John Carlson is the first player to reach 20 points this season. The Capitals defenceman scored twice in a 5-3 victory at Calgary on Tuesday to bring his total to five goals and 15 assists — three more than Edmonton captain Connor McDavid and Boston sniper David Pastrnak.