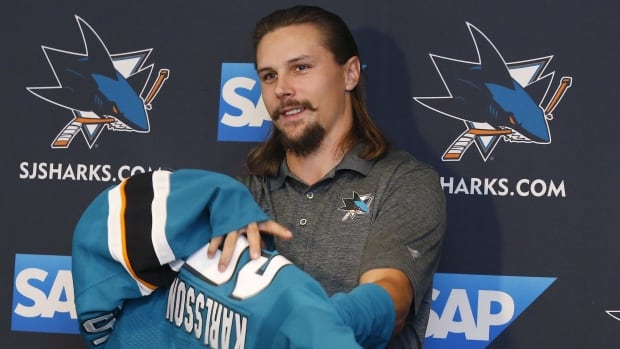 Karlsson’s first day with the Sharks went off without a hitch Wednesday. He paired up with Marc-Edouard Vlasic on defence in practice, took part in 3-on-3 drills with fellow Norris Trophy winner Brent Burns and began a new chapter in his career after nine seasons as the face of the Ottawa Senators.

“It’s definitely going to be a change,” he said. “I like to see challenges and I think it will be a fun challenge not only for me but this whole team. They’ve been a successful team for a number of years. They were extremely good last year and I’m extremely excited to be part of a good organization and good hockey club right from the start. I’ll do everything I can to fit in as good as I possibly can and being able to play the best hockey I know I can do.”

Erik Karlsson talked about his former team in San Jose on Wednesday. 0:27

The Sharks made the big deal to acquire the two-time Norris Trophy-winning Karlsson from the Senators last week for a package of young players and picks, adding a world-class player to a team now expected to contend in the ultra-tough Western Conference.

“I don’t think Erik has to adapt at all,” coach Peter DeBoer said. “He just has to do what he does. He’s one of the best players on the planet. We just need him to do what he’s done for his whole career. There will be some adaption.”

The acquisition was met with great fanfare from the billboards welcoming Karlsson to San Jose overlooking Bay Area freeways and an introductory news conference at a local hotel.

Karlsson met with members of the Sharks front office prior to the trade that sent him from Ottawa to San Jose. 0:44

The Sharks are doing everything they can to make Karlsson and his family feel comfortable in the new environment because they want to keep him long term. The 28-year-old is entering the final season of his contract.

“As of right now I’m just focused on starting the season as good as I possibly can to help this team win games,” Karlsson said. “That’s where I’m at right now and we’ll go from there.”

The Sharks have had great success keeping star players at home. General manager Doug Wilson has acquired several big-name players during his tenure from Thornton to Dan Boyle to Burns. The only player he wasn’t able to keep was defenceman Brian Campbell, who joined the team at the trade deadline in 2008 and then signed with Chicago the following summer.

Wilson started that process even before the deal. He and DeBoer flew to Toronto to meet with Karlsson with Ottawa’s permission before the trade was finalized. Owner Hasso Plattner also talked to Karlsson.

DeBoer doesn’t think Karlsson will have to make any changes to his game in order to fit in with the Sharks. 0:36

“We were given some opportunity to spend some quality time,” Wilson said. “I was truly blown away just by him as a person, sitting with him, how he sees the game, how he talks about the game, what his goals and aspirations are. That to me cemented that he would fit into this group so well.”

Karlsson has scored 518 points in his career, by far the most of any defenceman since he entered the NHL in 2009. He won the Norris as the league’s best defenceman in 2012 and ’15 and is one of the best quarterbacks on the power play in the league.

The Sharks wanted to improve that unit this off-season after ranking 16th in the league last season at 20.6 per cent and with Karlsson potentially setting up Burns for big point shots, they found the missing piece.

Karlsson had nine goals and 53 assists last season for Ottawa. He also has six goals and 31 assists in 48 career playoff games.

“What I love about Erik’s game, everybody looks at the offence, but he’s an exceptional defensive player, too,” DeBoer said. “So, I think we can use him in every situation. There’s very few players in the world that I would term you can use in the last minute of games when you’re up, or you’re down, to shut down the other team’s best players to create offence when you’re from behind, and he’s one of those guys. He has those type of tools. We’re going to use him in a lot of different ways.”