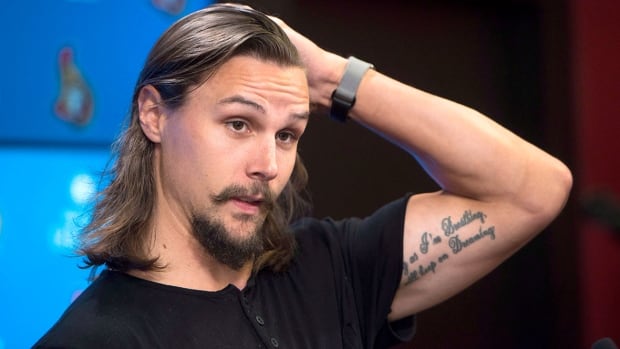 Click on the video above tonight at 6 p.m. ET as former Ottawa Senator Erik Karlsson addresses the media for the first time in San Jose as a member of the Sharks.

If San Jose re-signs Karlsson, Ottawa receives a conditional 2021 second-round selection — or a first-round pick (not lottery protected) if the Sharks reach the Stanley Cup final in 2019.

Pundits widely criticized the Senators for not getting enough in return for the superstar defenceman.

The Senators maintain their fan base supports the radical rebuild the franchise is currently undertaking, which includes the Karlsson trade.

In fact, team COO Nicolas Ruszkowski confirmed a poll the team took, claiming a vast number of fans back the rebuild plan.

However, CBC Sports conducted its own poll, where the numbers were far different. On the Hockey Night in Canada’s Twitter poll, readers were asked if they were confident with the direction of the Ottawa Senators.