New Jersey forward Taylor Hall has won the Hart Trophy as the NHL’s most valuable player.

Hall beat out Los Angeles captain Anze Kopitar and Colorado’s Nathan MacKinnon in a contest between three first-time finalists for the award.

Hall finished sixth in the league with 93 points for the Devils. He is the first New Jersey player to win the Hart.

Hall, the No. 1 pick in the 2010 draft, likely got the nod over two worthy contenders because of the way he carried the Devils offensively while they reached the playoffs for the first time in five years. He scored 41 more points than rookie Nico Hischier, the Devils’ second-leading scorer.

Voting for the Hart Memorial Trophy by members of the PHWA: <a href=”https://t.co/0nnksEGw6o”>pic.twitter.com/0nnksEGw6o</a>

McDavid voted as most outstanding

Connor McDavid has won the Ted Lindsay Award as the NHL’s most outstanding player as voted on by his fellow players.

The Edmonton Oilers captain beat out Colorado Avalanche centre Nathan MacKinnon and New Jersey Devils winger Taylor Hall for the honour to kick off the NHL Awards in Las Vegas. 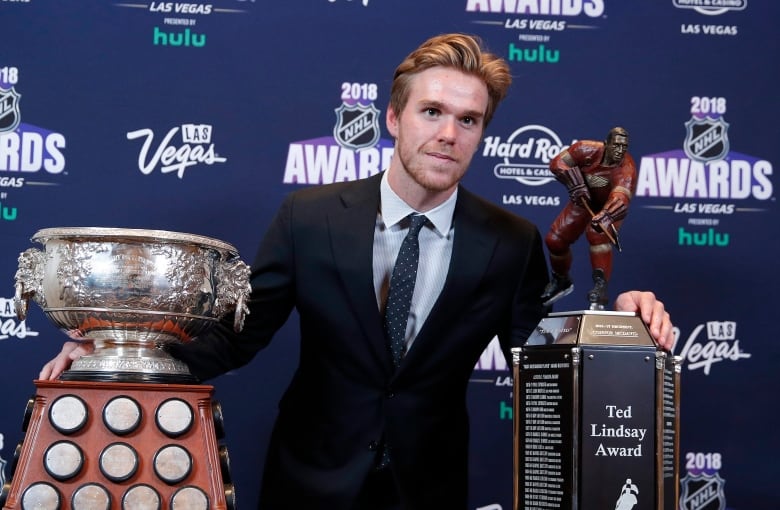 MacKinnon, Hall and Los Angeles Kings centre Anze Kopitar were in the running later in program for the Hart Trophy — the league MVP award voted on by the Professional Hockey Writers’ Association.

McDavid got the nod for both the Hart and the Ted Lindsay last season.

He had 41 goals and 67 assists with a plus-20 rating in 82 games for Edmonton this season.

Gerard Gallant of the Vegas Golden Knights has won the Jack Adams Trophy as the NHL’s top coach.

Gallant was an obvious choice over Colorado’s Jared Bednar and Boston’s Bruce Cassidy after he masterminded the most spectacular expansion season in recent sports history. The Golden Knights went 51-24-7 and handily won the Pacific Division before winning 13 postseason games and reaching the Stanley Cup Final in their first playoff campaign.

The 54-year-old Gallant was named the Golden Knights’ first coach in April 2017, and the veteran NHL coach provided steady leadership while turning Vegas’ expansion roster into a cohesive, motivated team. Gallant’s players praised his steady, intelligent approach to the postseason, which ended in a five-game loss to the Stanley Cup champion Washington Capitals.

Gallant previously coached in Columbus and Florida, but his teams had never won a playoff round before Vegas’ remarkable run.

The award was Vegas’ fourth of the night.

Nashville Predators goalie Pekka Rinne has won the Vezina Trophy as the NHL’s top goalie for the 2017-18 season.

The 35-year-old Finn took home the honour for the first time.

A finalist for the fourth time, Rinne beat out Connor Hellebuyck of the Winnipeg Jets and Andrei Vasilevskiy of the Tampa Bay Lightning.

Hellebuyck, 24, and Vasilevskiy, 23, were both up for the award for the first time in their careers.

Rinne tied for third in the NHL with 42 wins, two back of both Hellebuyck and Vasilevskiy.

He also had eight shutouts to tie Vasilevskiy for first, ranked fifth in goals-against average (2.31), seventh in save percentage (927).

Rinne won 11 straight games from Feb. 19 to March 19 as Nashville claimed its first Presidents’ Trophy for the best regular-season record to go along with new franchise highs for wins (53) and points (117).

The Tampa Bay Lightning defenceman took home the honour as the NHL’s top blue liner for the 2017-18 regular season at Wednesday’s awards show.

Hedman scored 17 goals — a personal best — this season to finish in a three-way tie for first among the league’s defencemen.

The 27-year-old Swede added 46 assists for his second 60-plus point season after finishing third in Norris voting last year.

Hedman beat out Drew Doughty of the Los Angeles Kings and P.K. Subban of the Nashville Predators.

Subban, also 28, had a career-high 16 goals and was one point shy of his hitting 60 for the second time in his career. A finalist for the third time, he won the Norris in 2013.

Mathew Barzal has won the Calder Trophy as NHL rookie of the year.

Barzal, 21, became the seventh rookie in NHL history with at least 20 goals and 60 assists, and just the second to record three five-point games.

Boeser finished second among rookies in goals (29) and fifth in points (55) in just 62 games. The 21-year-old’s season was cut short in early March after he suffered a back injury.

Keller, 19, had 65 points (23 goals, 42 assists), second among NHL rookies and most by a first-year member of the Coyotes since the franchise relocated from Winnipeg to Arizona in 1996.

George McPhee has been named the NHL’s general manager of the year in the fourth trophy given to the Vegas Golden Knights at the NHL Awards.

Exactly one year after his remarkable performance in the expansion draft, McPhee was a no-brainer choice for the award after his masterful assembly of the most successful debut team in recent sports history.

The Golden Knights went 51-24-7 and won the Pacific Division before reaching the Stanley Cup Final, setting innumerable records along the way for first-year success.

For the second time, Vancouver’s Henrik Sedin won the King Clancy Trophy. But this year, brother and teammate Daniel Sedin joined in the honours.

The Sedin twins shared the honour bestowed upon a player for leadership and humanitarian contributions to hockey.

They announced their retirement after the 2017-18 season following 17 seasons with the Canucks.

After Columbus made a deal with Vegas to take Karlsson off its hands in the expansion draft, the talented Swede had a breakthrough season for the expansion Golden Knights, racking up 43 goals and 35 assists with only 12 penalty minutes. Karlsson had never scored more than 25 points in any of his three previous NHL seasons with Anaheim and the Blue Jackets. 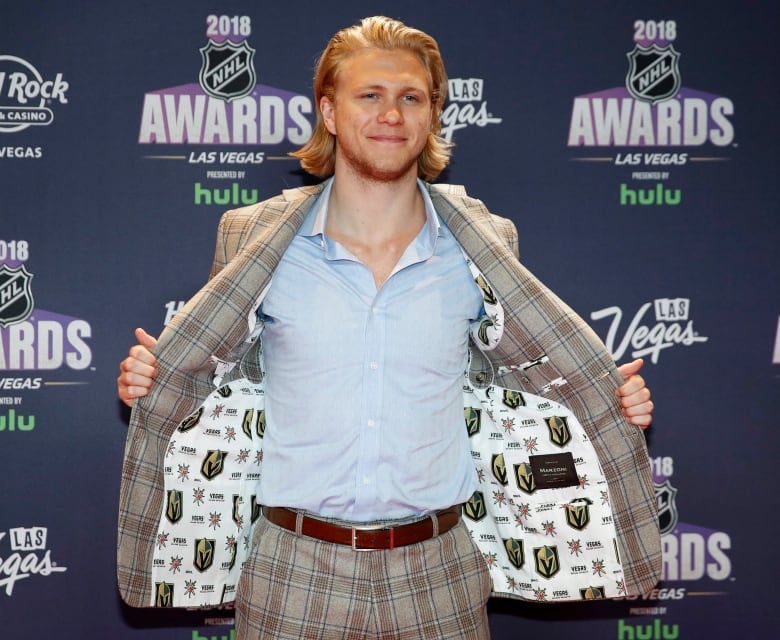 “Who would have thought?” Karlsson said with a smile after picking up his award.

Karlsson’s trophy is the first individual player honour earned by the Golden Knights. Coach Gerard Gallant, general manager George McPhee and defenceman Deryk Engelland are also up for awards later in the ceremony in the Knights’ hometown.

The 30-year-old Kopitar was nominated for the fourth time in five seasons, and won his only Selke in 2016.

A finalist for a record seventh consecutive year, passing Pavel Datsyuk’s six-season run from 2008 to 2013, Bergeron was looking for a record fifth Selke Trophy.

Couturier, 25, was up for the award for the first time.

New Jersey’s Brian Boyle has won the Masterton Trophy for perseverance and dedication to hockey.

The other finalists were Florida’s Roberto Luongo and Carolina’s Jordan Staal.

The 33-year-old Boyle was diagnosed with chronic myeloid leukemia during training camp, but he made it back into the Devils’ lineup in November and eventually represented New Jersey at the All-Star game after teammate Taylor Hall couldn’t go because of injury.

Boyle put together an outstanding season even while his 2-year-old son, Declan, also had significant health problems.