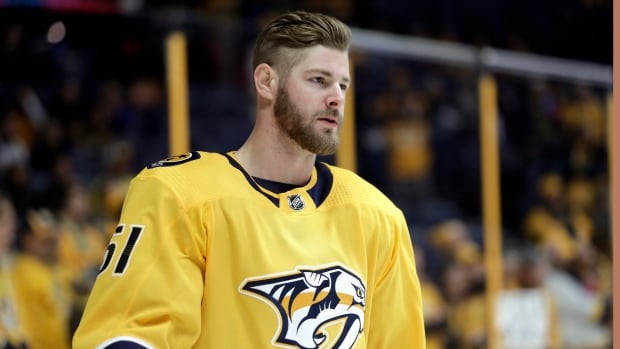 The NHL is criticizing an arbitrator’s decision to reduce the suspension of Nashville Predators forward Austin Watson, who pleaded no contest in July to a domestic assault charge.

The NHL issued a statement Friday saying that “we are disappointed with the arbitrator’s decision.”

“We firmly believe that the right of appeal to an arbitrator of league discipline was never intended to substitute the arbitrator’s judgment for that of the commissioner, particularly on matters of important league policy and the articulation of acceptable standards of conduct for individuals involved in the National Hockey League,” the NHL said in its statement.

The NHL added that “we will not hesitate to adhere to and enforce — through firm discipline as necessary — the standards of personal conduct we feel are appropriate for our league.”

The NHL doesn’t have a written domestic violence policy and takes each situation on a case by case basis.

Watson was arrested June 16 after a witness flagged down a police officer to a gas station in Franklin, Tenn. Watson told police he and his girlfriend were arguing and that he pushed her. Officers said they found red marks on her chest, and she said Watson caused them. Watson pleaded no contest to domestic assault on July 24.

He can have the misdemeanour charge dismissed by fulfilling terms of his judicial diversion program. Watson must serve three months of probation and complete both an in-patient treatment program and a batterer’s intervention program.

Watson is a former first-round draft pick who scored a career-high 14 goals and had five assists in 76 games during the 2017-18 regular season. He had five goals and three assists in 13 playoff games.

The 26-year-old Watson has 23 goals and 24 assists in 216 career regular-season games, all with the Predators.