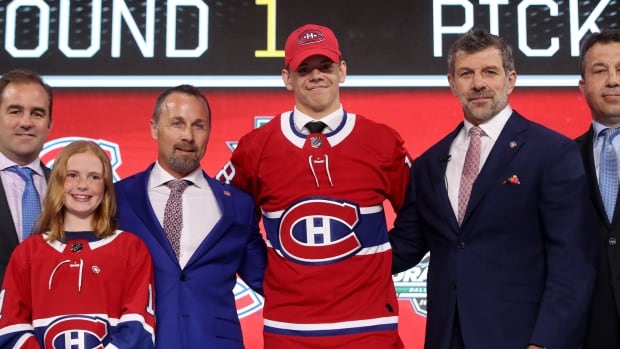 The Buffalo Sabres selected Swedish defenceman Rasmus Dahlin with the No. 1 pick in the NHL draft on Friday night.

Considered far and away the class of the 2018 talent pool, the slick 18-year-old had seven goals and 13 assists in 41 games for Frolunda of the Swedish Hockey League in 2017-18.

Dahlin is the second Swedish-born player selected first overall. Mats Sundin was the top choice of the Quebec Nordiques in 1989.

The six-foot-three, 185-pound Dahlin was honoured as the top blue liner at the 2018 world junior championship in Buffalo, registering six assists in seven games. He also played twice for his country as a 17-year-old at the 2018 Pyeongchang Winter Olympics.

The Montreal Canadiens, the first Canadian team to pick, took Finnish centre Jesperi Kotkaniemi with the No. 3 selection. The Ottawa Senators then selected Boston University winger Brady Tkachuk, the son of ex-NHLer Keith Tkachuk, at No. 4.

The Arizona Coyotes selected the first Canadian-born player in the draft, grabbing Barrett Hayton of Peterborough, Ont., with the fifth pick. The centre plays for the OHL’s Sault Ste. Marie Greyhounds.

Prior to the start of the draft, NHL commissioner presented the 2017-18 Humboldt Broncos with the E.J. McGuire Award of Excellence.

The Broncos were on their way to Nipawin for a Saskatchewan Junior Hockey League playoff game on April 6 when their bus collided with a truck, resulting in the deaths of 16 people, including 10 players.

Created in 2015, the E.J. McGuire Award of Excellence is given annually by the league to the draft candidate who exemplifies commitment to excellence through strength of character, competitiveness and athleticism.

“From this tragedy, the hockey world has come to learn more about the Humboldt Broncos organization and players, their role in the fabric of their community, and their commitment to the pursuit of excellence both on and off the ice,” Dan Marr, director of NHL Central Scouting, said in a statement. “The stories we have heard about those who were lost and those who continue to heal have been truly inspirational and serve as great examples of all the characteristics this award was meant to recognize.”