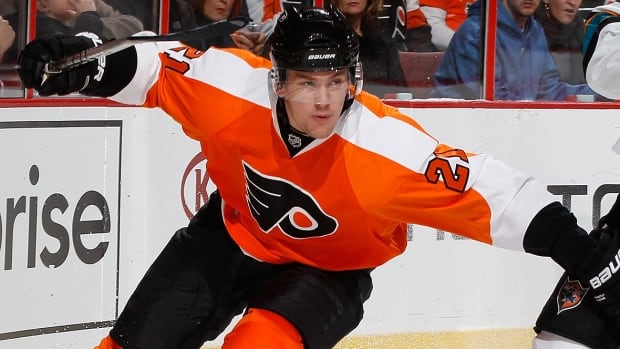 Fresh off a career-high and team-best 36 goals, van Riemsdyk is expected to return to the Philadelphia Flyers, who drafted the six-foot-three, 220-pound left-winger second overall in 2007.

The 29-year-old’s deal is reported to be five years and worth $35 million US.

Van Riemsdyk finished fifth in Maple Leafs’ scoring with 54 points this past season, the durable forward’s sixth in Toronto and ninth in the NHL.

The native of Middleton, N.J., has demonstrated a strong net-front presence in recent seasons and the ability to be a top-line forward with 201 points in his past 285 games.

Van Riemsdyk broke into the NHL with Philadelphia in the 2009-10 season, scoring 15 goals and 35 points.

He was traded to Toronto in June 2012 for defenceman Luke Schenn.

As expected, veteran NHL centre Tomas Plekanec is said to be returning to Montreal a one-year contract worth $2.25 million after helping guide the Leafs to the post-season for a second consecutive season.

The 35-year-old took time to settle in with Toronto after being acquired ahead of the Feb. 26 trade deadline, posting only two assists in 17 regular-season games while being a dependable player in the faceoff circle.

Plekanec, who had a combined 26 points in 77 games with Montreal and the Leafs, added two goals and four points in seven playoff contests.

Montreal also signed free agent forward Matthew Peca to a two-year contract with annual salary cap hit of $1.3 million, and inked defenceman Xavier Ouellet to a one-year, one-way contract worth $750,000 in the NHL.

Polak, Aaltonen on the move