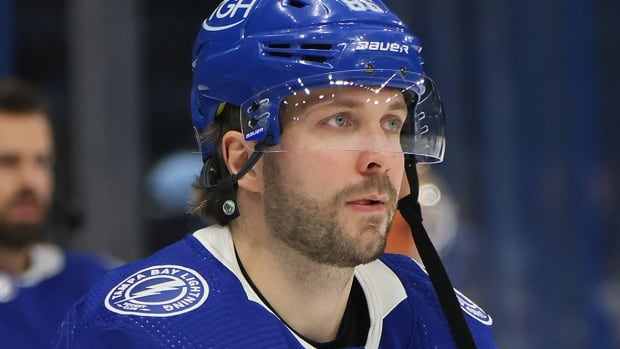 Nikita Kucherov was happy to be the villain last summer.

After his Tampa Bay Lightning hoisted the Stanley Cup for a second straight season, the star winger sported a T-shirt with the slogan “$18M Over the Cap” in response to criticism the team had unfairly gamed the NHL system.

Tampa was salary cap compliant during the regular season, but that threshold — $81.5 million US at the time — doesn’t apply during the playoffs when rosters expand.

Kucherov, who was on long-term injured reserve for the duration of the league’s 56-game campaign, would go onto put up 32 points in 23 playoff contests.

“We had a great season,” Carolina defenceman Dougie Hamilton said after the Hurricanes were eliminated by Tampa in the second round. “We lost to a team that’s $18 million over the cap.

Stretching the salary cap into the playoffs was one of the subjects talked about by the NHL’s 32 general managers at this week’s annual meetings in Manalapan, Fla., but that’s as far as things went.

At least for now.

“A lot gets made of it,” Calgary Flames GM Brad Treliving said Tuesday. “Nobody thinks there’s been abuse of it to the extent that there’s something that needs to change.

“It was a healthy discussion.”

Treliving added the Kucherov situation which included his $9.5-million cap hit being off Tampa’s books during the season — allowing the Lightning to add more talent, and then becoming irrelevant in the playoffs — was the reason for momentum around the issue ahead of the first in-person GM meetings since March 2020.

“What doesn’t get talked about is Kucherov didn’t play all year,” he said. “The league will review it.

“If there’s a need or requirement for change, we’ll talk about.”

NHL commissioner Gary Bettman said the system has worked well since the league’s hard cap was introduced in 2005.

“There was nobody who believed in that room that it’s been abused,” he said. “It’s been more perception.

“But nobody was sitting there saying, ‘This is a terrible abuse, we’ve got to fix it.”‘

Deputy commissioner Bill Daly outlined how the league approaches players on long-term injured reserve (LTIR) when their expected date of return falls around the start of the playoffs to ensure everything is above board.

“We deal with the clubs, we get their medical records, we employ an independent medical expert,” he said. “We’ve never had any issues that stemmed from that.

The Vegas Golden Knights have garnered attention this season for their cap gymnastics with relation to LTIR.

Asked if he was satisfied how that franchise has handled its business, Bettman chose his words carefully.

“Based on what I know about it to this point, yes,” he replied.

Any change to the current system would have to be collectively bargained with the NHL Players’ Association — something the league doesn’t appear to have an appetite for as things stand.

“In some ideal world, maybe that would be a good change,” Bettman said of the cap counting in the post-season. “The roster situation is different in playoffs.

“It’s not anything that it’s going to get addressed as a front-burner issue anytime soon.”

One thing that should be changed in short order is how the NHL deals with players and no-trade lists.

The Golden Knights attempted to deal Evgenii Dadonov to the Ducks prior to last week’s deadline to clear cap space.

The only problem? Anaheim was one of the teams on the winger’s no-trade list.

The embarrassing situation concluded after 48 hours when the league voided the deal that would have also sent a second-round draft pick to Anaheim for inactive centre Ryan Kesler, who isn’t expected to resume his playing career, and defenceman John Moore.

The league’s central registry, which handles all trades and initially gave the swap a thumbs up, never received Dadonov’s list.

In fact, the league hasn’t been in possession of that information in the past — it was incumbent on clubs to disclose those contract details for players with no-trade protection — but that’s likely to change after the Dadonov saga.

“We’ve already had discussions with the players’ association,” Daly said. “I don’t anticipate it being a problem getting to what we need.”

The league confirmed its salary cap is still projected rise to jump $1 million to $82.5 million next season.

Bettman said the league believes revenues will be close to its $5-billion target for business in 2021-22 “notwithstanding some of the challenges from the restrictions for the Canadian clubs on attendance” related to the COVID-19 pandemic this winter.

GMs were briefed on a return of the World Cup of Hockey in 2024, but plans remain preliminary.

“We’ve got to step it up,” Daly said. “We’re a little bit behind already in terms of organizing that event.”

Daly wouldn’t say if the league is eyeing a February or September tournament.

A return of the squad of North American young stars and Team Europe, however, aren’t part of the current discussion.

Ottawa GM Pierre Dorion fought back tears as he spoke about Senators owner Eugene Melnyk, who died Monday at age 62.

“He’s someone that brought stability,” Dorion said. “If not for Eugene Melnyk, the Senators would not be in Ottawa.”

Bettman recalled a meeting in his office back in 2003 when Melnyk was in the process of purchasing the team out of bankruptcy.

“It’s very, very sad,” said the commissioner. “He was a well-respected voice in the board of governors’ room.

“He will be missed.”