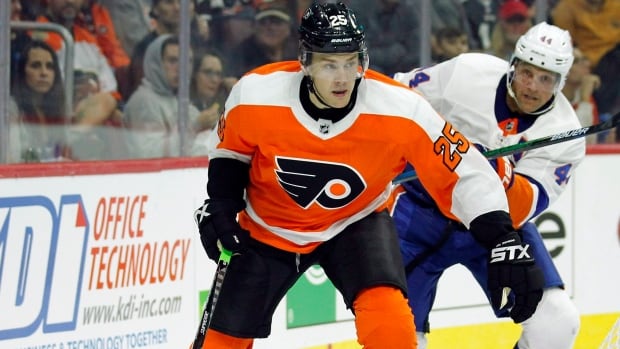 Philadelphia Flyers winger James van Riemsdyk is out five to six weeks with a lower-body injury.

General manager Ron Hextall announced the time frame for van Riemsdyk’s absence on Monday. The former Toronto Maple Leafs forward was hit with a shot from Avalanche defenceman Mark Barberio during the first period of Saturday night’s 5-2 loss at Colorado.

Van Riemsdyk was playing just his second game back with the Flyers after they signed him to a five-year, $35-million US contract on July 1. He had an assist in a season-opening victory at Vegas last week.

With van Riemsdyk out, Jordan Weal is expected to be inserted into the lineup after being a healthy scratch for the first two games of the season. The Flyers host the San Jose Sharks in their home opener Tuesday.

The 32-year-old had a goal and an assist and won 68.8 per cent of his faceoffs in the Blue Jackets’ first two games of the season. Dubinsky has 148 goals and 278 assists for 426 points in 764 regular-season games with the Blue Jackets and New York Rangers.

Alexander Wennberg and free agent addition Riley Nash will be counted on to play more minutes with Dubinsky out.

In other Blue Jackets’ news, defenceman Scott Harrington was activated off IR after missing the first two games of the season with an upper-body injury in a Sept. 28 pre-season contest against Pittsburgh.

The 25-year-old had two goals, five points and an even plus-minus rating in 32 regular-season games in the 2017-18 season.

A native of Kingston, Ont., Harrington has also spent time with Toronto and Pittsburgh, which drafted him in the second round in 2011.