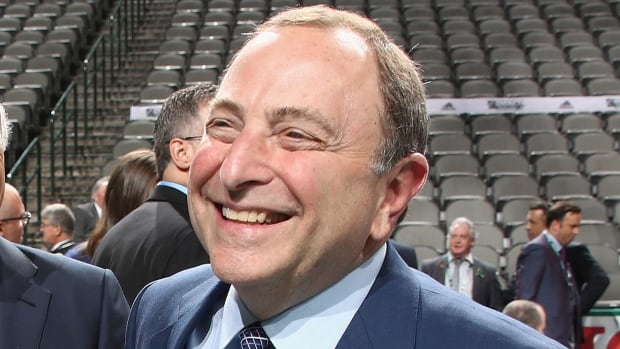 The NHL is getting involved in the sports gambling industry, with commissioner Gary Bettman announcing a multi-year partnership Monday with MGM Resorts International, an American global hospitality and entertainment company.

The NHL, which won’t receive a cut of gambling profits, is following the NBA’s lead by providing the company with data for use in sports betting.

“Fan engagement, sports alignment is one of the pillars of this relationship,” MGM chair and CEO Jim Murren said at Monday’s news conference.

The Las Vegas-based casino giant is the league’s first official sports betting partner. As part of the agreement, MGM gains access to proprietary NHL data that could eventually include puck and player tracking information.

MGM executive Scott Butera and NHL chief revenue officer Keith Wachtel tell The Associated Press the aim is to provide unique gambling opportunities, including free games to those in states where sports gambling isn’t yet legal.

The casino giant has made a series of significant moves, including a multi-year deal announced in July with the NBA and WNBA — the first major U.S. sports leagues to strike an arrangement with a gambling company.

According to a Nielsen sports study, the NHL would see a financial windfall from legal sports betting of as much as $216 million US annually due to widely available, legal and regulated sports betting.

In May, the U.S. Supreme Court struck down a federal law making sports gambling illegal in many states, allowing the NHL to move forward.

At the time, Washington Capitals owner Ted Leonsis called the decision “a great one for sports fans” and added he was eager to embrace the expansion of sports betting in the U.S. He said legalized betting would protect the integrity of sports against potential corruption and pave the way to implement safeguards against fraud.

All four major professional sports leagues in the U.S., the NCAA and the federal government had urged the court to uphold the federal law. In court, the NBA, NFL, NHL and Major League Baseball had argued that New Jersey’s gambling expansion would hurt the integrity of their games.

It’s estimated hundreds of billions of dollars are bet on sports every year by American gamblers — the vast majority of it illegally. Now, with the sports gambling landscape set to change drastically over the next few years, leagues, owners and players all want a slice of this lucrative pie.

“I think everyone who owns a top-four professional sports team just basically saw the value of their team double,” Mark Cuban, owner of the NBA’s Dallas Mavericks, told CNBC earlier this year.

The sports gambling market in Canada is enormous. Paul Burns, vice president of the Canadian Gaming Association, estimates Canadians wager around $10 billion illegally every year on sports, with much of the money flowing to offshore online sports books.

“In contrast,” he told CBC Sports earlier this year, “they spend about $500 million on provincial sports lottery games” such as Ontario’s Pro-Line.

In the roughly two decades since the advent of internet gambling sites, Canadians authorities have largely ignored this multi-billion-dollar phenomenon, allowing online sports betting to exist in a kind of legal grey area where both bookmakers and bettors are more or less free to operate.

“There have been no prosecutions that resulted in convictions or guilty pleas, so the offshore sports books look at Canada as a grey zone,” says lawyer Michael Lipton, a gaming law expert with Dickinson Wright in Toronto.

Why has the Canadian government chosen to mostly turn a blind eye to internet betting? Gambling has traditionally been the responsibility of the provinces, which have overseen lotteries and brick-and-mortar casinos within their borders. Most of the hundreds of websites offering casino and sports betting to Canadians exist in exotic international locales far beyond the provinces’ jurisdictions. And the federal criminal code offers little guidance when it comes to internet gambling.

“The criminal code was written decades ago, and these provisions with respect to gaming were drafted in the 1960s and haven’t really been updated since,” says lawyer Chad Finkelstein, a gaming law expert who has advised casino operators. “These provisions were not drafted with anything remotely resembling the internet ever contemplated. So we have outdated, antiquated provisions, which makes it difficult to apply to a modern gaming business.”