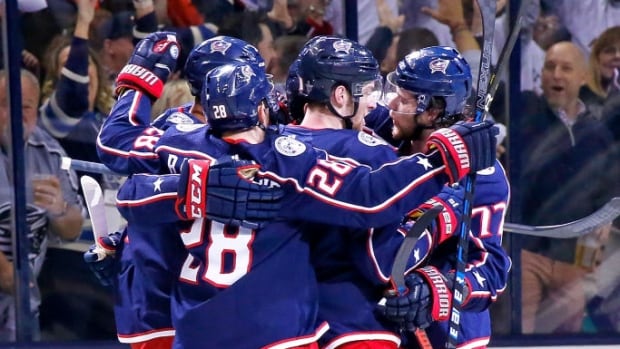 With the Presidents’ Trophy-winning Tampa Bay Lightning out of the playoffs, the path for an upstart team in the East to reach the Stanley Cup final is now slightly easier.

The Toronto Maple Leafs could get that grudge match with the New York Islanders in the conference final that so many NHL fans were hoping for; the challenge of defending their Stanley Cup title could be less daunting for the Washington Capitals; or the last team to lock in their spot in the post-season could continue their Cinderella run.

But not so fast — the giant-slaying Columbus Blue Jackets aren’t exactly slouches. Though the Jackets entered the series against the record-setting Lightning as huge underdogs, they finished the season with 98 points in an incredibly close Metropolitan Division that had five teams reach the post-season (there were only six points separating them from the division-leading Capitals).

That’s just two points behind Toronto — so  Leafs fans might not want to draw up any Stanley Cup parade routes just yet.

Although the Maple Leafs won the season series with Columbus 2-1, all those games were played in a six-week period in November and December, well before Columbus went all-in with a series of deals ahead of the Feb. 25 trade deadline.

This Blue Jackets team looks much different than they did in the final weeks of 2018.

Matt Duchene, who joined the team after a trade with the Ottawa Senators, has been electric in the playoffs with three goals and seven points in four games.

Matt Duchene sets a Columbus franchise record for assists and points in a playoff game with 1-3-4. 1:34

The team’s power-play has been lethal at 50 per cent. Entering the post-season, they had the 28th best power-play in the league at just 15.4 per cent, but their penalty kill was tied for best with the Lightning and Coyotes at 85 per cent.

Goaltender Sergei Bobrovsky is rolling with a .932 save percentage and came up with several huge saves in Game 4 as Tampa was desperately trying to fight back. Bobrovsky and Artemi Panarin, both pending free agents, were among names floating around at the deadline, but Columbus held onto the fan favourites and it is so far paying off.

Bolstered by winning the first-ever playoff series in franchise history with a 7-3 Game 4 win on Tuesday, the Blue Jackets will be a formidable opponent for anyone in the East.

On the other side of the East playoff bracket, the Pittsburgh Penguins met the same fate, getting dispatched by the Islanders in four games.

Despite New York finishing ahead of Pittsburgh in the regular season, the once mighty Penguins were favoured by many to advance fairly easily.

Although it’s highly unlikely that Islanders goalie Robin Lehner will maintain his .956 save percentage through the rest of the post-season, his team has been clicking in a similar manner to the Blue Jackets and their timing couldn’t be better.

These weren’t the storylines anyone was expecting ahead of the playoffs. But one thing we can be sure of is that we can’t be sure of anything this time of year.