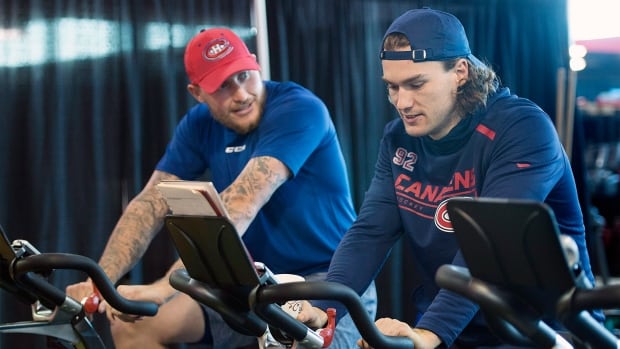 Taking ice away from NHL players has caused some to resort to desperate measures.

“You’re kind of going back to that `Rocky’ mentality where you’re doing push-ups and sit-ups and punching the cow,” Columbus forward Nick Foligno said.

NHL players are running, biking and trying to stay in shape in case the season resumes after being put on pause because of the coronavirus pandemic. While many athletes can replicate the workouts and movement of their sports — NBA players are missing the gym — hockey players have no way to truly replace skating while rinks are closed.

“I don’t think too many people have access to rinks or anything like that, and that’s a huge hurdle for a player,” Washington defenceman John Carlson said. “It doesn’t matter how hard you train, the on-ice stuff is different and we’re going to have to pick it up pretty quick when things turn around here.”

While there remains plenty of uncertainty over whether the NHL will play again this season, players are proceeding as though they will. Aside from a few exceptions, most haven’t skated since before play stopped March 12, and self-quarantine guidelines will keep them off the ice for at least another week and likely longer.

WATCH | Can these crazy ideas save sports?

This is nowhere near normal for athletes used to spending the spring gearing up for the intensity and brutal grind of the NHL playoffs.

“I can just do my workouts and just try to stick as close to a routine as you can,” New Jersey defenceman P.K. Subban said. “It’s hard because you’re anticipating the season coming back, but at the same token it’s so much time. And when you’re not skating, there’s nothing you can do that’s going to mimic skating.”

Little things have to fill the void for now. Team trainers are sending out customized plans to players with home gym setups. Running has replaced practicing. Biking might be the only way to simulate the high intensity of a shift — sort of.

“That all helps and it’s great, but there’s absolutely nothing you can do to prepare for the ins and outs of a shift and the physicality of it,” Boston defenceman Torey Krug said. “Not only are you trying to mimic the skating motion, but there’s no way you can train for going into the corner with a guy who’s 6-foot-2, 210 pounds and trying to out-battle him and get the puck and skate away from him.”

Draisaitl’s Edmonton teammate Connor McDavid is staying strong by lifting his dog, Lenny, and Lee takes his dogs for a run to keep his heart rate up. Philadelphia’s Scott Laughton does yoga with his girlfriend on occasion, which is one way to keep his mind and body sharp.

Manson said he doesn’t want to risk going to a store to get roller blades. Anaheim teammate Hampus Lindholm has taken his blades for a spin or two during quarantine, but he and others around the league are quick to point out it doesn’t require the same balance or train the same muscles as ice skating.

“You don’t get the buildup of lactic acid and having to deal with your groins and your hip motion when you’re digging into the ice and trying to stop and start, and that’s a big part of it,” Krug said.

Minnesota’s Zach Parise tries to stay sharp playing 1-on-1 in the basement with his 6-year-old son, Jaxe. He also bought a bike because he is not much of a runner.

WATCH | Athletes have been social distancing for years:

Rob Pizzo looks at times in sports when athletes have kept their distance.  1:10

Resigned to life off the ice for some time, players — especially those with young families — are typically getting workouts done early in the day like it’s a morning skate. There are no games to prepare for at night, but they know there will be at some point.

“You just try to do what you can, make it fun,” Foligno said. “It’s our job. We’re pros and athletes for a reason, so it’s something we have to make sure we continue to do and be ready if called upon.”