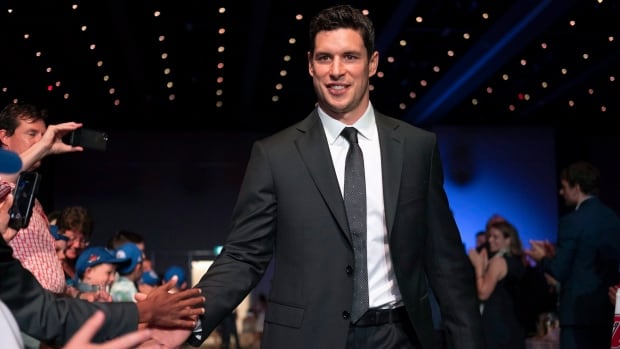 Acclaimed hockey superstar Sidney Crosby has another bullet point to add to his growing list of accolades, having been honoured as the top Nova Scotia athlete of all time at a gala dinner Thursday night.

The Cole Harbour, N.S. native was voted number one in a list of the province’s top 15 athletes compiled by the Nova Scotia Sport Hall of Fame, which hosted the dinner and fundraiser at the Halifax Convention Centre.

More than 1,000 people packed into the centre’s spacious ballroom for the event in celebration of the province’s greatest players.

In a question-and-answer session with hall of fame CEO Bruce Rainnie, Crosby said his success in hockey is largely motivated by his love of the game.

“I think I’ve understood over the years that you have a small window to do something you love, and for whatever reason, that was instilled pretty early,” said Crosby.

“I know that at one point it’s going to stop, but I want to make sure that I enjoy every minute of it.”

Crosby, captain of the Pittsburgh Penguins, brought the Stanley Cup to Halifax after each of his three championships, including in 2016 and 2017. This year, his team was eliminated by the Washington Capitals, who went on to win the Stanley Cup.

Now 30, Crosby was named team captain just over 10 years ago, and became the youngest NHL captain to lead his team to a Stanley Cup victory in over 100 years in 2009.

‘Need a group of leaders’

According to Rainnie, the top 15 list was voted on by 36 Nova Scotian athletes, coaches and media representatives, as well as by members of the public.

At 22 years old, Black is the youngest athlete on the list, but she already has an impressive track record. In 2017, she became the first Canadian gymnast to win a World Championships all-around medal.

On Thursday, she attributed her success to community support from her hometown of Halifax, N.S.

“It doesn’t matter where you come from, whether it’s a small town, small city, small province … you can achieve those dreams, and I think all of us have proved that,” she said.

Tickets weren’t cheap: at $125 per child and $225 per adult, those in attendance were sure to be big supporters of Nova Scotia’s sports scene.

Tina Barnes, a self-proclaimed sports fan and an attendee of the event Thursday night, said the price tag was worth it.

“This is about really supporting our own, supporting our community, and really paying tribute to what our athletes have done in the world,” she said.

“The fact that we come from a very small community, and we’ve excelled and become part of a bigger community, that’s what makes it so special.”

An auction was held as well with lots of items and memorabilia up for bid, including sports jerseys signed by all surviving members of the top 15 list.

Proceeds from the event will be shared by the hall of fame and the Sidney Crosby Foundation, an initiative to assist charities that improve the lives of disadvantaged children.