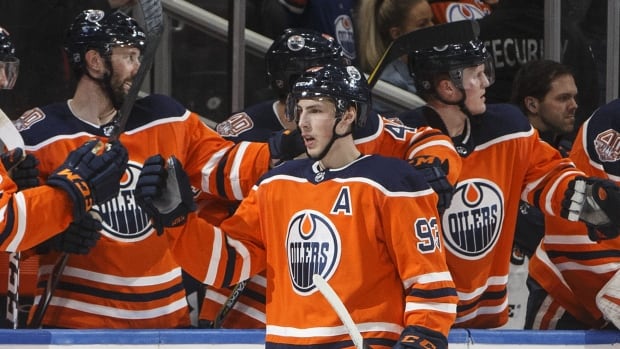 Ryan Nugent-Hopkins posted a first-period hat trick, and Leon Draisaitl collected three goals in a four-point night as the host Edmonton Oilers scored five times in the opening frame en route to an 8-4 victory over the Los Angeles Kings on Tuesday night to keep their slim playoff hopes alive.

Goalie Mikko Koskinen made 34 saves for Edmonton, which is five points behind the Colorado Avalanche for the second wild-card spot in the Western Conference with six games remaining.

After Alex Iafallo opened the scoring for the visitors at the 2:10 mark, Nugent-Hopkins and the Oilers went gangbusters before the intermission. Nugent-Hopkins’ first of the night came just 82 seconds after the opening tally, and Draisaitl hit the scoresheet 64 seconds later, going coast to coast with the puck before snapping home a shot from the slot. Zack Kassian joined the fun just past the period’s midway point.

Nugent-Hopkins found the mark a second time at 14:18 with another long puck that beat Kings goalie Jonathan Quick and then completed the hat trick with 11.9 seconds remaining in the period for his career-best 28th goal of the season.

Drew Doughty’s power-play goal just shy of eight minutes into the second period made it a 5-2 game, but the Oilers again pulled away thanks to middle-fame goals three minutes apart by Connor McDavid and Draisaitl. Draisaitl rounded out the scoring with 91 seconds remaining for his first career three-goal game, which gives him 46 on the season.

It’s the first time two Oilers collected hat tricks in a game since Dec. 20, 1985, when Jari Kurri and Paul Coffey accomplished that feat.

McDavid finished with four points, which has him at a new personal standard of 112.

Dustin Brown and Carl Grundstrom scored late second-period goals for the Kings, who have long been eliminated from playoff contention.

Quick was pulled from the Kings net after making only six saves in the first period. Jack Campbell stopped 18 shots in relief.