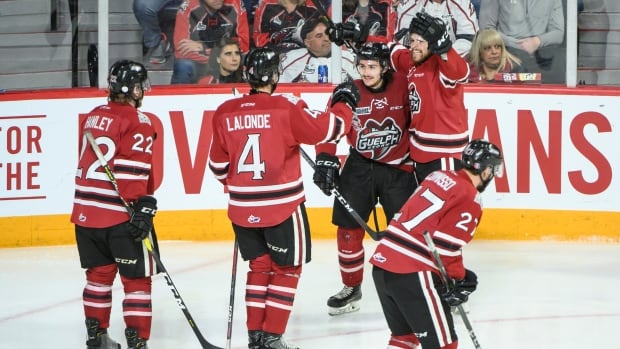 This time last year, the Guelph Storm were playing their way to an Ontario Hockey League title and a spot in the Memorial Cup.

But with the remainder of the 2019-20 regular season and playoffs cancelled due to the COVID-19 pandemic, the Storm front office has let go of the dream of back-to-back championships and has put all of its attention on the OHL priority selection draft.

“You feel badly for our kids at the OHL level, kids in their [NHL] draft year, kids trying to sign pro contracts, 20-year-old’s last kick at playoffs, a lot to consider and it’s really unfortunate that they haven’t had a playoff season,” said Guelph general manager/head coach George Burnett.

“Having said that, our focus has been on the draft.”

The OHL will hold its annual online draft this Saturday amidst the novel coronavirus outbreak that has halted the majority of sporting events across the world, including the Memorial Cup for the first time in its 102-year history.

The Priority Selection has been held online every years since 2001. However this time around teams will be working remotely and adhering to all government and public health guidelines on physical distancing when selecting the 2004-born skaters.

Team staff are not allowed to work the draft from their hockey offices or arenas and will be making their announcements through a conference call, most likely, from home.

Players will not be able to enter into league offices for introductions and sweaters on draft day, or to meet their new fans, and interviews are out of the question.

The league also reminded prospects and families about the province currently prohibiting organized public gatherings and social gatherings of more than five people, keeping celebratory groups tight, while American-based OHL teams are following the rules set in place by their state.

“We’re trying to create some positives in a very difficult and anxious time for players and their families. They’ve been looking forward to this opportunity, some for many years, and we’re all working remotely, respecting all the government guidelines,” said Burnett.

“You’ve got a scouting staff that has worked diligently and the kids have put in the hard work and training, and at a very difficult time if we can provide some good then I think that’s the thinking at this time.”

From chicken coops to rollerblading with baby strollers, the Pacific Division is keeping busy during the quarantine. 3:32

Burnett doesn’t make a selection until the No. 12 spot rolls around. The Storm have 16 total picks in the 15-round draft that will see 300 players chosen.

The North Bay Battalion have the first overall pick after sitting in last place when the season was cancelled on March 18.

The top five is rounded out by the Niagara IceDogs, Sarnia Sting, Sault Ste. Marie Greyhounds and Kingston Frontenacs.

Forward Adam Fantilli, six-foot-two 181 pounds, is considered by most as the top prospect for this year’s draft after spending 2019-20 with Kimball Union Academy — a US high school prep program based in Plainfield, N.H. However, the Toronto native signed with the United States Hockey League’s Chicago Steel on March 25, making it highly unlikely he comes back north while allowing him to keep the NCAA route open when he turns 18.

Shane Wright was taken No. 1 in 2019 by the Kingston Frontenacs after the Burlington, Ont., native was granted exceptional player status and entered the OHL a year early as a 15-year-old.

The Greater Toronto Hockey League led the way with 81 players selected from 11 different organizations at the 2019 draft, while 66 players were chosen from 34 different American-based clubs. All but two of the remaining skaters were taken from the Ontario Minor Hockey Association, Alliance Hockey, Hockey Eastern Ontario, Northern Ontario Hockey League and Hockey Northwestern Ontario.

Each OHL team has a 50-player protection list to begin the season that allows them to hold the rights of drafted players that don’t make the junior squad in the fall. An OHL team can only carry four 16 year olds, so the majority of the players picked will end up in major midget (now under-18), Junior B or a tier-2 league somewhere else.

Come March, teams have to cut their list to 35 skaters, forcing them to keep the ones they believe can be a part of the team in the near future while parting with the others so they can pursue other opportunities.

“Everybody’s ego gets in the way sometimes, wanting to play junior, but sometimes it’s better to be in a midget program, be a leader, be a captain, continue the process,” said Burnett. “The decision they make is extremely important.”