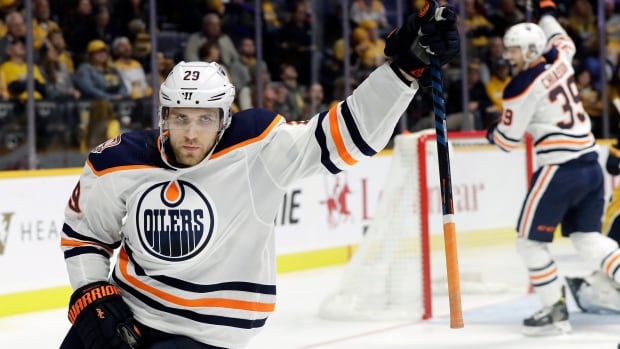 Leon Draisaitl and Drake Caggiula each scored twice and the Edmonton Oilers ended a 13-game losing streak against Nashville with a 5-3 victory Saturday.

Connor McDavid also scored and Mika Koskinen made 24 saves in his first start of the season and first for the Oilers. Edmonton was 0-11-2 in its previous 13 games against the Predators dating back to 2014.

Filip Forsberg had a hat trick for Nashville, and Juuse Saros stopped 31 shots.

Nashville cut it to 4-3 with 4:06 left on Forsberg’s final goal. He connected on a power play, with Saros off for an extra attacker. Caggiula capped the scoring with an empty-netter.

The Oilers’ last two wins have come against the reigning Presidents’ Trophy winner in Nashville and the defending Stanley Cup champion Washington Capitals. The Predators are 5-0-0 on the road, but only 3-3-0 at home.

Edmonton struck first when Caggiula batted home a rebound at 11:41 of the first period. Edmonton made it 2-0 when Draisaitl scored a tic-tac-toe goal on passes from Milan Lucic and McDavid on a power play at 4:14 of the second.

Shortly after that, Nashville prevented the Oilers from adding to the lead by killing a four-minute penalty when Ryan Johansen was called for high-sticking.

Forsberg made it 2-1 on a power play late in the second. Seven seconds later, McDavid broke loose on a breakaway off the faceoff for his team-best seventh goal. Draisaitl scored at 4:19 of the third, and Forsberg answered 24 seconds later.