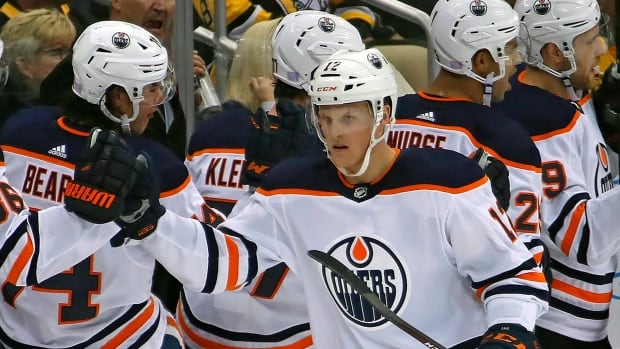 Undeterred, a minor-league journeyman named Colby Cave – wearing No. 12 for the Oilers – leaned over the boards and took time to chat with the enraptured Predators. Hutzal snapped a photo of a moment his son, and his teammates, will never forget.

“To see a guy – a call-up running out of chances to stick in the league – going out of his way to talk with them struck a chord with me,” Hutzal says. “There would have been so many other things on his mind, but he felt it was important to spend some time with the kids regardless of his status on the team.”

The hockey world – already stunned by the sudden shutdown necessitated by the COVID-19 pandemic – hoped and prayed for a better outcome when news broke last week that Cave was in a medically-induced coma.

Fellow players, fans and complete strangers – many of them stuck at home in hopes of reducing the spread of COVID-19 – also turned to social media to pay tribute and grieve.

Cave logged three seasons with AHL Providence before finally cracking the Boston Bruins lineup in 2018-19. He scored his first NHL goal in style on a feed from David Pastrnak against Montreal Canadiens superstar Carey Price.

“He was a very well-liked and well-respected player in the locker-room.”

“Hey buddy, it’s Cave from the other side, just wanted to reach out and hope you’re ok buddy,” Cave wrote. “You’re a tough kid, and I respect a guy that stands up for himself. Hope you have a quick recovery buddy.”