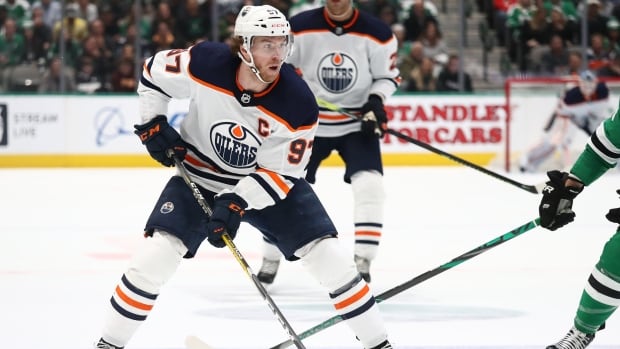 On the prospects of Edmonton becoming one of two hub cities, McDavid said he’s not expecting any kind of edge.

“The building is going to feel weird with no fans being in there and what not, so I would say probably not. That’s just my opinion.”

Edmonton Oilers captain Connor McDavid, who was part of the NHL/NHLPA’s Return to Play Committee, and his teammate Darnell Nurse discuss the creation of the NHL’s 24-team playoff plan. 1:57

Nurse, meanwhile won’t be fazed by playing in front of empty seats.

On Tuesday, NHL commissioner Gary Bettman announced the league and NHLPA agreed to a return-to-play format, which concludes the remainder of the regular season and begins a 24-team playoff plan.

The new plan would see the top-4 clubs in the Eastern and Western Conference play two abbreviated round-robin tournaments to determine playoff seeding.

Commissioner Bettman outlined the NHL’s 24-team playoff format, and the draft lottery. 2:11
The league hopes to have players at team facilities early next month under strict health and safety guidelines, hold training camps sometime after July 1 and begin playing games later that month or early August.

The East’s best-of-five play-ins would see Pittsburgh versus Montreal, Carolina versus the New York Rangers, the New York Islanders versus Florida, and Toronto versus Columbus.

Edmonton Oilers defenceman Darnell Nurse says even though they will be competing in an empty arena, the opportunity to win a Stanley Cup should be enough to motivate players. 1:08