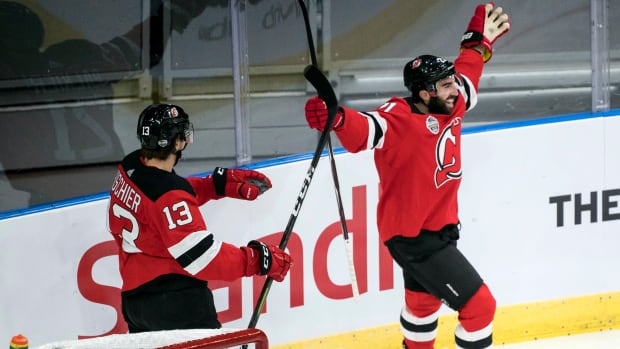 Kyle Palmieri and Travis Zajac scored two goals each to lead the New Jersey Devils to a 5-2 victory over the Edmonton Oilers in their season-opening game Saturday night in Gothenburg, Sweden.

The game at Scandinavium was part of the NHL Global Series.

Despite the presence of Connor McDavid and Taylor Hall, the last two Hart Trophy winners, Palmieri and Zajac stole the show.

Stefan Noesen also scored and Miles Wood had two assists for New Jersey and Keith Kinkaid made 17 saves. Edmonton got the goals from Milan Lucic and Leon Draisaitl.

He picked up the puck near the boards in the offensive zone, moved unchecked toward the net from the left and beat Cam Talbot inside the far post on the first shot on goal still in the opening minute.

The Oilers came back on a power play and it was captain McDavid who set it up.

The star centre used his speed to carry the puck up ice from his own up zone and skated around the goal to feed Milan Lucic in front for a one-timer to tie it at 4:01.

New Jersey took control early in the middle period with two goals from Palmieri and Travis Zajac in the span of 1:09.

Palmieri scored on a power play for his second 2:01 and Travis Zajac doubled the advantage after Talbot lost the puck behind the goal.

The Devils clearly dominated at this stage, outshooting the Oilers 10-4 in the period.

Zajac added his second in the third after a defensive blunder by defenceman Matt Benning before Draisaitl reduced the deficit to 4-2. Noesen finished it off with an empty netter.

It was the 23rd NHL regular-season game played in Europe, the 11th in Sweden and the first in Gothenburg.

The NHL will return to Europe next month. On Nov. 1-2, the Florida Panthers and the Winnipeg Jets will play each other in a couple of regular season games in the Finnish capital of Helsinki.