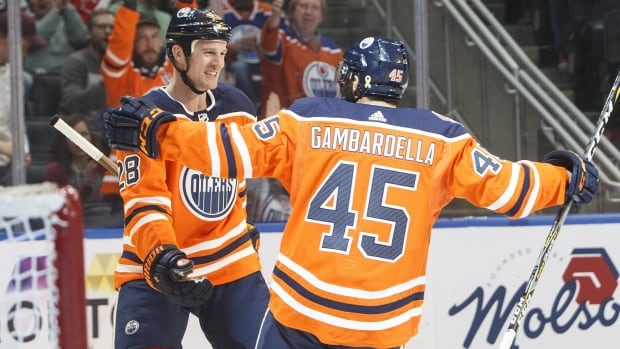 Connor McDavid had a goal and an assist and Leon Draisaitl had three assists as the Edmonton Oilers emerged with a 4-1 victory over the Columbus Blue Jackets on Thursday.

David Savard responded for the Blue Jackets (40-30-4), who have lost three in a row.

Oilers CEO Bob Nicholson took some heat after comments made at a season ticket holder’s breakfast earlier Thursday, seeming to blame forward Tobias Rieder’s lack of production as a major factor in their current low position in the standings, and saying he would not be re-signed.

Connor McDavid recorded a goal and an assist in Edmonton’s 4-1 win over Columbus on Thursday. 0:30

Rieder has no goals in 60 games this season. Nicholson reportedly said he “stepped out of bounds” later in the day.

Columbus’s loss coupled with Montreal’s 4-0 shutout of the New York Islanders earlier in the day put the Canadiens into the Eastern Conference’s second wild card spot, one point ahead of the Blue Jackets.