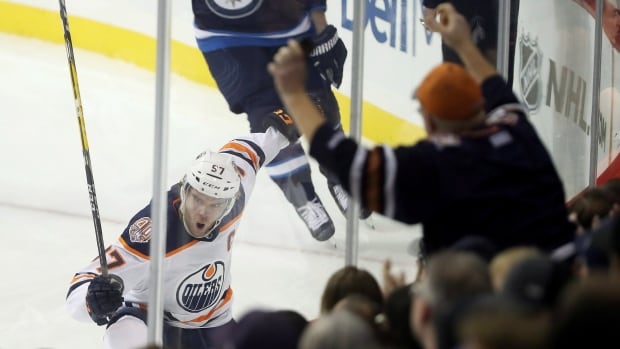 It took a record-setting performance by Connor McDavid, but after four games on the road and 17 days living out of a suitcase, the Edmonton Oilers will take on the Boston Bruins in their home opener at Rogers Place Thursday with something to build on.

After a gruelling schedule that took them to Germany for an exhibition game and to Sweden for their season-opener against New Jersey, the Oilers are home with a 2-2 record thanks to a rousing comeback in a 5-4 overtime win over the Winnipeg Jets Tuesday that had McDavid’s fingerprints all over it.

McDavid scored two goals and added two assists, giving him four goals and five assists on the Oilers’ first nine goals this season. Darnell Nurse decided it in overtime with the first goal McDavid hasn’t been in on. Adam Oates held the record with points on the first seven goals of a season, a mark set with the Detroit Red Wings in 1986-87.

Edmonton defeats Winnipeg 5-4 in overtime, Connor McDavid sets NHL record by being involved on his team’s first 8 goals to start the season. 2:06

“It definitely feels better coming back,” McDavid said. “Last night could have easily gone the other way where it ended 6-1 or 7-1 and we’re talking about a whole different thing and answering a bunch of different questions today.

“It definitely helps the mindset and, hopefully, we can keep the ball rolling.”

After starting 0-2 — a 5-2 loss to the Devils and a 4-1 defeat against the Bruins in Boston — the Oilers bounced back with a 2-1 win over the New York Rangers. Down 4-1 in Winnipeg, it looked like they’d drop to 1-3 until McDavid willed them back.

“The fact we were able to come back against a really good team is as important as the 2-2 record,” coach Todd McLellan said. “For me, 2-2 is better than 1-3 but the ability come back and have a total team effort was real big as well.”

With just five goals in their first three games, the Oilers needed a jolt of offensive confidence. Ty Rattie got some Tuesday with his first goal of the season. So did Jesse Puljujarvi, who notched his first — just his second in 20 games dating back to last season — to tie it 4-4 against the Jets. Both came on assists from McDavid.

“As a leader, I don’t think you can get much better than what Connor brings every day,” Nurse said. “When you have the best player in the world and his first and foremost focus is winning hockey games, it’s contagious.”

The rematch with the Bruins marks the first of four straight games at home for the Oilers, who haven’t played at Rogers Place since Sept. 29, when they beat the Calgary Flames 4-3 in pre-season.

“It feels a whole lot bigger in your head and in the dressing room, I think,” Rattie said of the difference between coming home 2-2 and 1-3. “It’s a fun plane ride when you win.

“It’s a good feeling in this room right now, but we woke up this morning and that’s over with. We’ve got to take care of business.”