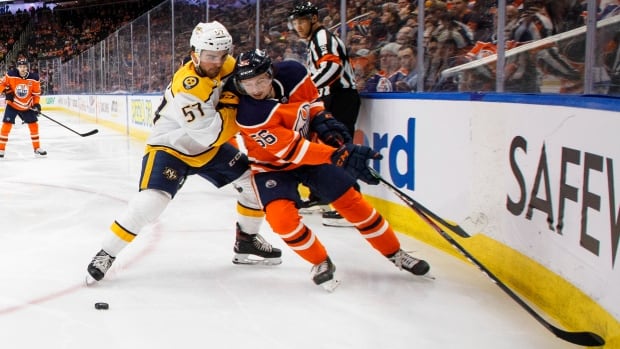 Leon Draisaitl had two goals and an assist as the Edmonton Oilers emerged with a 4-2 victory over the Nashville Predators on Tuesday.

Ryan Nugent-Hopkins and Josh Archibald also scored and Connor McDavid picked up three assists for the Oilers (25-18-5), who have gone 5-1-1 in their last seven outings.

Filip Forsberg and Colin Blackwell replied for the Predators (21-17-7), who saw a two-game winning streak ended.

Nugent-Hopkins opened scoring for Edmonton nine minutes into the first period when he sent a wrist shot up high past Nashville goalie Pekka Rinne off a face-off win. It was Nugent-Hopkins’s 13th goal of the season and his sixth in the last seven games.

The Predators responded two minutes later on a beautiful goal by Forsberg, who came from behind the net and lifted the puck up lacrosse-style to bank it off Oilers starter Mike Smith and in for his 16th of the campaign.

Nashville took the lead with four minutes left in the opening frame as they caught the Oilers on a bad line change, allowing Nick Bonino to make a nice feed to Blackwell, who notched his second career NHL goal.

Edmonton pulled even with 18 seconds left in the first on the power play as Draisaitl chipped in a rebound.

The Oilers surged back ahead just before the midmark of the second period as McDavid fed it across to Archibald, who lifted it over a sprawling Rinne.

Draisaitl’s goal into an empty net put the game away for in the final minute. The backhander was his 27th goal of the season.

The Predators return home to face the Anaheim Ducks on Thursday, while the Oilers are off until Saturday, when they host the Arizona Coyotes.