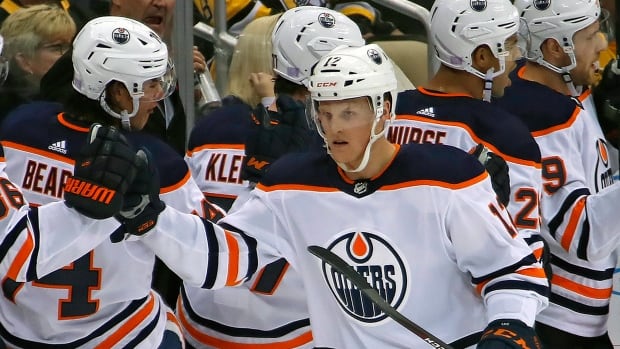 Edmonton Oilers forward Colby Cave remains in a medically-induced coma at a Toronto hospital after suffering a brain bleed earlier this week.

“Colby is still in a medically-induced coma,” the team said. “This is giving his brain time to heal and rest from all he’s been through.”

The 25-year-old native of Battleford, Sask., was airlifted to Sunnybrook Hospital in Toronto on Tuesday after being admitted to a hospital in Barrie, Ont., on Monday.

Cave underwent emergency surgery Tuesday, with doctors removing a colloid cyst that was causing pressure on his brain.

“We need a miracle,” she wrote. “Colby’s parents and myself, got to see him through a window and talk to him with a walkie-talkie last night. We are no longer allowed to be in the hospital because Covid-19 rules. We have no idea when we will be allowed to see him again.

“The nurse has tied his wedding band to his ankle. I am dreaming of being able to touch you, hear your voice, squeeze your hand [3 times], and kiss you again. I love you so much, and my heart is shattered into a million pieces without my best friend.”

Cave’s agent, Jason Davidson, said Tuesday that his illness doesn’t appear to be linked to the COVID-19 pandemic.

Cave scored once in 11 appearances with Edmonton this season and added 11 goals and 23 points in 44 games with the American Hockey League’s Bakersfield Condors. He has four goals and five assists over 67 NHL games with Boston and Edmonton.

The six-foot-one, 200-pound Cave made his NHL debut with Boston on Dec. 21, 2017 after getting called up from Providence of the AHL.