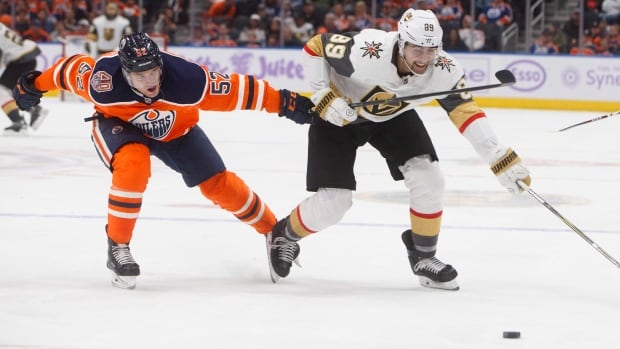 Jonathan Marchessault had two goals and an assist to help the Vegas Golden Knights beat the Edmonton Oilers 6-3 on Sunday night.

Connor McDavid, Alex Chiasson and Leon Draisaitl scored for Edmonton. The Oilers are 9-10-1 after dropping six of seven.

The Golden Knights scored three goals in a 2:12 span early in the second period. Eakin tied it at 2 with a short-handed goal at 2:21, Pacioretty struck at 3:53, and Marchessault added a power-play goal at 4:33.

Vegas added to its lead 34 seconds into the third on a redirect by Marchessault, his 10th, and piled on with another goal by Smith three minutes later. Edmonton got one back from Draisaitl shortly after that.

Edmonton scored 52 seconds into the game on its first shot when McDavid tipped Matt Benning’s shot that had goalie Marc-Andre Fleury completely going in the opposite direction. McDavid has 12 goals this season.