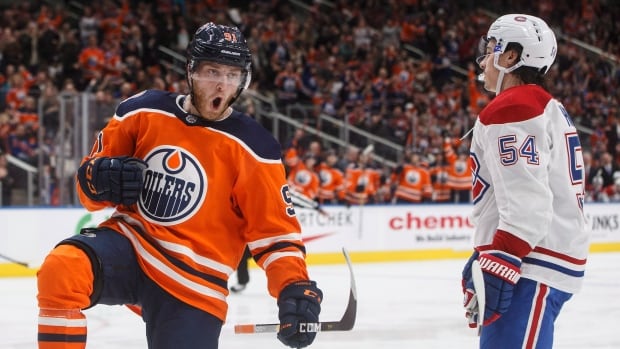 Leon Draisaitl had a goal and two assists and Connor McDavid had three assists as the Edmonton Oilers snapped a season-high four-game losing streak with a 6-2 victory over the Montreal Canadiens on Tuesday.

Matt Benning, Drake Caggiula, Ryan Nugent-Hopkins, Darnell Nurse and Kris Russell also scored for the Oilers, who inched back over the .500 mark at 9-8-1.

Max Domi and Andrew Shaw replied for the Canadiens (9-6-3), who have lost three of their last four.

Edmonton kicked off the scoring on a fluke goal three minutes in as Benning’s point shot was off the mark but came off the boards and hit Montreal goalie Antti Niemi from behind and caromed in.

Montreal drew even a couple of minutes later just after killing off a penalty when Domi came in with a head of stream and picked the top corner past Oilers goalie Mikko Koskinen for his 10th of the season.

The Oilers regained the advantage with three-and-a-half minutes left in the opening frame as McDavid shrugged off a defender and fed it over to Draisaitl, who scored his 11th goal.

The Habs tied the game again just over a minute into the second period when Jonathan Drouin fed it from behind the net to Shaw, who trickled a shot past Koskinen.

Caggiula fished a puck out of the air and then scored for Edmonton two minutes later on a knuckleball of a shot.

Nugent-Hopkins scored on a deceptive wrist shot 5:36 into the third to make it 4-2 for the Oilers.

Edmonton added to their lead on a long shot by Russel with eight minutes left and they got their third goal from the blue line with two minutes left on a goal by Nurse, matching the number of goals they have had from defencemen in the entire season thus far in one game.

Both teams next game takes place in Calgary with Montreal playing the Flames on Thursday and the Oilers off until heading to Calgary on Saturday.