Kyle Okposo scored on a power play with 1:01 left in the third period, and the Buffalo Sabres rallied to beat the Montreal Canadiens 4-3 on Thursday night.

Sam Reinhart also had a goal in the third period, Jason Pominville scored twice and Jeff Skinner had three assists for the Sabres, who have won three straight to improve to 6-4-0 — their best start after 10 games since the 2011-12 season. Carter Hutton stopped 19 shots.

Max Domi scored two goals for the Canadiens, who were beaten in regulation for the first time in six games. Joel Armia had the other goal and Antti Niemi made 38 saves.

Sabres rookie Rasmus Dahlin set up Okposo’s one-timer from the right circle for the winning goal. A tripping penalty on Armia put the Sabres on the power play with 1:19 remaining.

Reinhart’s first goal of the season tied the game for Buffalo with 6:53 left in the third period. Jake McCabe fed Reinhart in the right slot for a one-timer.

Domi scored his second of the game and fourth of the season on a low wrist shot from the right slot 6:34 into the third period. It was the Canadiens’ first shot on goal of the period.

Pominville netted tying goals for Buffalo twice in the second period and tied Thomas Vanek for 10th in franchise history with 497 career points. Jeff Skinner assisted on both of Pominville’s goals.

Pominville poked in the rebound from his own shot with just under nine minutes left in the period and rose up from his knees to lift a loose puck over Niemi on a power play with 2:18 remaining. Niemi was scrambling back into position after getting tangled with Pominville outside the net, but the goal was upheld after Montreal challenged for goaltender interference. 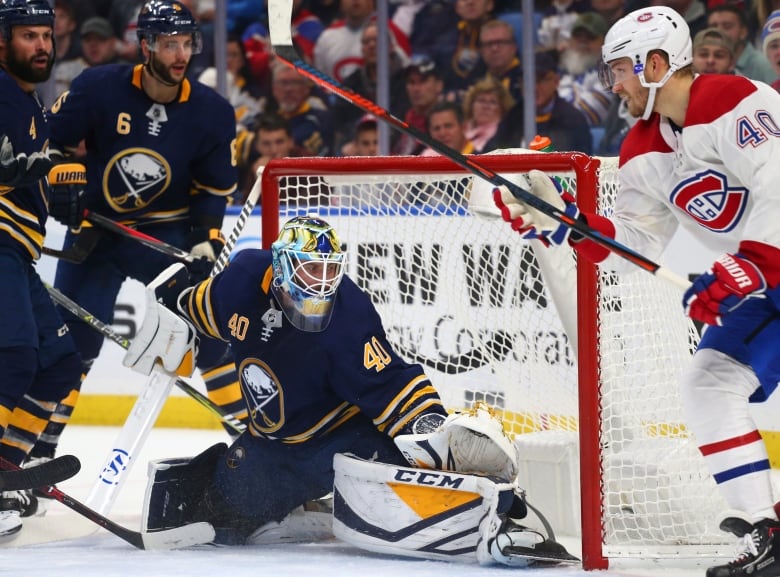 Armia had put Montreal ahead 2-1 with his wraparound goal less than two minutes earlier.

Domi extended his point streak to five games and gave the Canadiens the lead 1:17 into the game. The scoring chance started with Atturi Lehkonen’s forecheck along the right board. Domi collected the bouncing puck outside the face-off circle, maneuvered around Pominville and sent a wrist shot over Hutton’s shoulder.