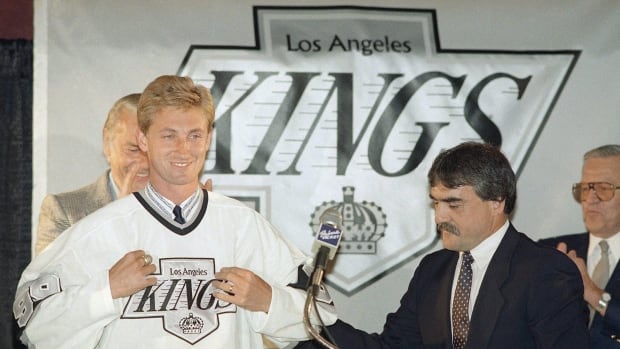 On the eve of the 30th anniversary of his stunning trade from the Edmonton Oilers to the Los Angeles Kings on Aug. 9 1988, Wayne Gretzky was more focused on the future of hockey than his own past.

Holding a press conference in support of the Hlinka Gretzky Cup under-18 hockey tournament in Edmonton, the top scorer in NHL history was naturally asked about the anniversary of his trade to the Kings from the Oilers, with whom he won four Stanley Cups.

“I don’t really talk about it much,” he said. “It happened. It is part of life and part of history. It seems like it was 10 years and then 25 years and now here we are at 30 years. I’m sure at 35 years I will get asked the same questions, but I don’t talk much about it. Everybody pretty much knows what transpired, and that is that.

“It was as much as a surprise to me as to anybody else that I was traded, but that is a part of sports.”

It’s been 30 years since The Great One uttered the words “I promised Mess I wouldn’t do this” and shocked the sporting world. The Gretzky trade sent Canada into mourning, and the NHL into expansion. 4:29

Gretzky preferred to discuss the future of the Hlinka Gretzky Cup, which continues through to the finals on Saturday. It is the first time the event — which made its debut 27 years ago — has been held in Edmonton. It will return to Alberta’s capital every two years, with the tournament taking place in the Czech Republic on odd years.

Although attendance had not exactly been record setting through the first three days, particularly for the games not featuring Canada, Gretzky feels that once hockey fans are more exposed to the event that it will grow into a much bigger deal.

‘It’s going to take a bit of time’

“It’s going to take a bit of time,” he said. “I played in the world junior tournament in 1977 and we had 1,200 people in the Montreal Forum. Now you look at a world junior game when Canada plays and you can have 17,000 people there. This isn’t going to happen overnight. It is a great hockey market in a great sports city.

“They had a nice crowd for the Canada game for Game 1 and I am sure as the week goes a long that the Canadians will draw more and more people. I am very impressed by the Canadian team.”

Another topic of discussion was the recent news that Gretzky has been named a global ambassador for Beijing’s Kunlun Red Star of the Kontinental Hockey League, as China looks to ramp up interest in hockey in advance of hosting the Winter Olympics in 2022.

“We’ve been working on this for close to two years,” he said. “The Chinese business community has really rallied around ice hockey because of the upcoming Olympics. They have built these academies and my son and I are going to go over and do hockey academies there and see about building ice rinks in China. And it turns out there is an NHL game when we are there, so we’ll get to go to that, too.

“It will be fun trip. I have never been to China and I am looking forward to it.”

The Boston Bruins and Calgary Flames will face off in Shenzhen on Sept. 15 and Beijing on Sept. 19.

As for getting NHL players back in the Olympics in time for China, Gretzky says he hopes that comes to pass.

“I’ve made no secret that I believe the players should be at the Olympics,” he said. “I think it rallies the country and the players love to play in it. Hopefully they can come to an agreement, the league and the union, and we can get the best players back into the Olympics.”