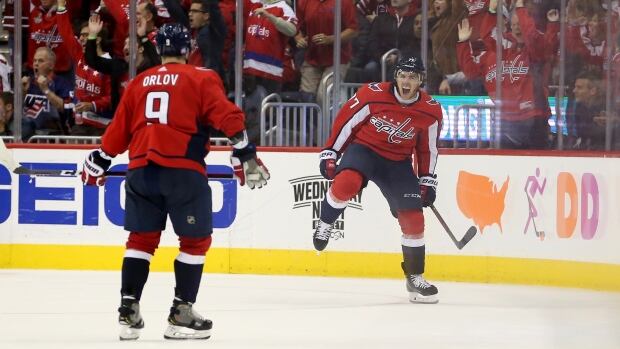 T.J. Oshie watched the clock in the training room hoping he’d get back on the ice.

Oshie was back there for a second time Wednesday night after he took a shoulder to the head from Evgeni Malkin that made an earlier stick to the face seem like an afterthought. With Malkin ejected for the illegal check to the head, Oshie returned to score late and lift the Washington Capitals over the Pittsburgh Penguins 2-1 in a meeting of the two most recent Stanley Cup champions.

The Capitals forward needed two stitches to close a cut by his left eye and went through concussion protocol before returning to the game and becoming the hero by scoring with 1:14 left. Oshie doesn’t care much what happens next to Malkin, who could get a hearing with the NHL department of safety. Oshie’s focus is solely on Washington winning its second in a row.

“My face is a little messed up, but I’m feeling pretty good now,” Oshie said. “He caught me there, and it is what it is. I passed my concussion test, went out and won the game.”

T.J. Oshie left the game twice due to injury, but battled through the pain to score the game winner in Washington’s 2-1 victory over Pittsburgh. 1:44

After Oshie took Olli Maatta’s stick to the face in the opening minutes, Sidney Crosby and Alex Ovechkin traded power-play goals in a vintage showcase of their career-long rivalry. While he sat waiting to return to the game, Oshie heard about how goaltender Braden Holtby was standing on his head to keep the Capitals in the game.

Holtby stopped 41 of the 42 shots he faced for his first win since Oct. 22. He got some help from the post on almost a half-dozen occasions, but Holtby also turned in his best performance of the season.

“I felt comfortable as the game moved on,” Holtby said. “I got some breaks, too, early on. The posts obviously was a break we weren’t getting in the past.”

The Penguins dominated for much of the night and still lost their fifth consecutive game. They have just one point during the skid and face the possibility of being without Malkin in the near future.

Power play goes off the rails

With Pittsburgh on the power play early in the third period, Malkin passed the puck and lifted his right shoulder into Oshie’s head and kept skating. The officials conferred before deciding to give Malkin a five-minute major penalty.

“He maybe thought I was coming to hit him and so he threw the reverse shoulder out there, which I try to do that all the time,” Oshie said. “I just wasn’t expecting it being on the PK.”

Pittsburgh coach Mike Sullivan said it didn’t matter what he thought of Malkin’s hit and added he’s not concerned about the star Russian centre facing further discipline. Sullivan was more optimistic about his team’s play than in previous games since returning from a successful trip to Western Canada.

Malkin gets a major for this hit on Oshie, who went to the room <a href=”https://t.co/vUsRGLBbOL”>pic.twitter.com/vUsRGLBbOL</a>

“I thought it was a solid effort by everybody in the locker room, everybody on the bench,” Sullivan said. “I thought our guys played extremely hard. We deserved a better fate tonight.”

Pittsburgh outshot Washington 42-22 and got 20 saves from Casey DeSmith in his first career start against the Capitals. He was powerless to stop Oshie’s goal after a pass from John Carlson gave him a wide-open net.

Late in a sloppy game full of turnovers and whiffs on the puck, Oshie just wanted to make sure he didn’t shoot so high he missed the net. After missing most of the first and third periods, Oshie made the most of his only shot in 13:51 of ice time.

“I barely saw him on the bench there,” center Nicklas Backstrom said. “He came back right in time. That’s what big players do. They come back, they score the game winner.”