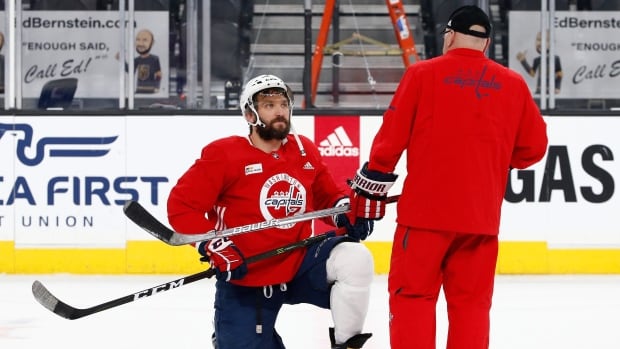 One win from hoisting the Stanley Cup, the Washington Capitals are trying not to think beyond the next shift or the next period.

The Capitals head into Thursday’s Game 5 of the Cup final against the Vegas Golden Knights with a 3-1 stranglehold in the best-of-seven series, sitting just 60 minutes — barring overtime — from their first title in the franchise’s 43-year history, and Washington’s first championship in North America’s four major sports leagues since 1992.

“Most of us have never been in this position,” Alex Ovechkin said after Wednesday’s crisp practice at T-Mobile Arena. “For me personally, I don’t try to think about too much what’s going on and just try focusing on different things.

And what are those different things?

“Whatever. Cars. Hotels,” the Russian sniper joked. “You know, Vegas.”

All kidding aside, Washington is on the brink of something special for a city that has suffered incredible sporting heartbreak since the Redskins’ Super Bowl triumph 26 years ago.

Until this spring, teams from the District of Columbia had failed to even get to a conference final since the Capitals’ only other trip to the Cup in 1998, which ended in a four-game sweep at the hands of the Detroit Red Wings.

The Redskins and baseball’s Nationals have stumbled in the playoffs, while the NBA’s Wizards (formerly the Bullets) haven’t advanced past the second round since 1980.

Then there are the Capitals, who have blown a record five 3-1 series leads in their history, most recently in the first round of the 2010 playoffs and then again in the second round of 2015.

The current roster is aware of the history — how could they not be? — but the players insist outside pressure to finally get over the title hump isn’t on their collective mind.

“Our team just likes playing together, likes going out there and having fun, trying hard, working hard, doing it for each other,” goalie Braden Holtby said. “Everything else has been really irrelevant in our locker room. It’s not a conversation we’ve had.

“We just want to go out there and play good hockey and do everything we can to win.”

Despite their trying sports history, Washington fans should be feeling pretty good about that possibility heading into Thursday.

Only 1 team has blown 3-1 series lead in final

The Capitals have faced their fair share of adversity not only in recent years, including back-to-back crushing second-round defeats to the Pittsburgh Penguins, but also in these playoffs.

Washington was down 0-2 to the Columbus Blue Jackets after losing the first two at home in this spring’s opening round before winning four straight, won Game 7 on the road in Pittsburgh, and came back from a 3-2 deficit against the Tampa Lightning to advance to the final.

The Capitals have also won nine road games in the playoffs, one short of tying the NHL record held by four other teams, thanks in large part to Conn Smythe Trophy candidates Evgeny Kuznetsov (31) points and Ovechkin (24 points).

But the message ahead of Game 5 is to simply stay with the process, and continue what’s got them to this point.

“You work so hard to get to this point and you want to make it happen,” head coach Barry Trotz said. “We talked about just having make sure that we’ve got focus on one game.”

The expansion Knights, meanwhile, one of the most incredible stories in league history, won’t be going quietly.

“There’s no Plan B or backdoor,” Vegas defenceman Nate Schmidt said. “There’s no side entrance get into. You have to face the thing head on. There’s no way to do it except fight your way out of the corner.

“Our group revels in those types of situations.”

It’s a challenge the Capitals are eager to meet.

“There’s a very proud team on the other side,” Trotz said. “I can’t tell what’s going to happen, but I can tell you you’re going to need your best game if you want to get this done.”

And getting it done would lift a burden off a team and city that’s lasted more than a quarter of a century.