Alex Ovechkin scored two goals and set up two more to lead the Washington Capitals to a 5-2 win over the Vancouver Canucks on Monday.

Defenceman Troy Stecher and Sven Baertschi responded for the Canucks (5-4-0).

Braden Holtby stopped 22-of-24 shots for Washington (4-2-2), while Vancouver goalie Anders Nilsson turned away 28 of 33.

The Capitals were first on the scoreboard, notching a goal during four-on-four play 2:20 into the game.

Jakub Vrana got a pass off to Carlson as the defenceman streaked back from Washington’s end. Carlson then tipped a shot past Nilsson with the puck clinking off the post on the way in.

The Canucks drew even midway through the second, with Stecher winding up and taking a shot from the blue line. Washington’s Nic Dowd tried to glove the puck out of harm’s way but redirected it into his own net.

The goal was Stecher’s first of the season.

Washington went into the game 10-for-26 on the power play and they showed why on Monday.

After a series of quick, crisp passes, Kuznetsov took a slapshot that sailed in past Nilsson.

All five of the Russian centreman’s goals this season have come on the power play. 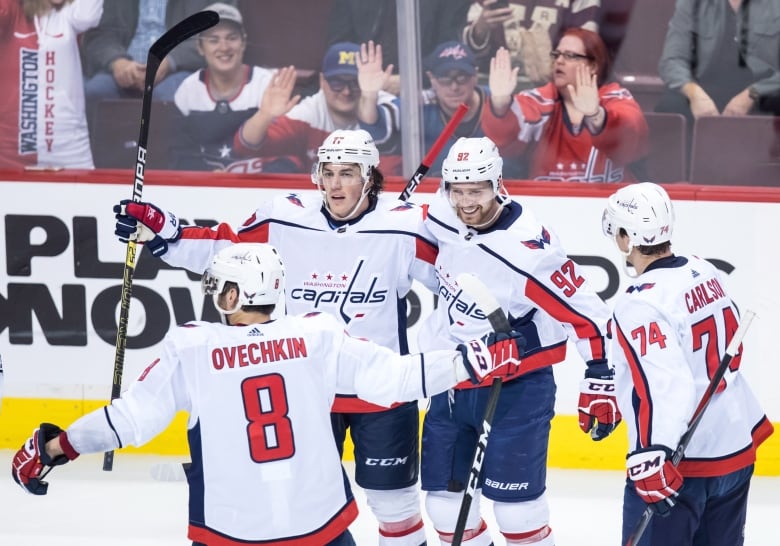 Washington’s stars struck again with less than 30 seconds to go in the period. The top line peppered Nilsson with shots and the Canucks goalie managed to stop a blast from Nicklas Backstom, but couldn’t contain the rebound.

The puck bounced off Ovechkin and into the Vancouver net, putting the Capitals up 3-1.

But Vancouver refused to quit.

The Canucks started the third period on a power play and right winger Brock Boeser fired a hard shot on Holtby seconds into the frame. The puck bounced off the goalie’s pads and on to Baertschi’s stick.

Holtby didn’t have time to reset before Baertschi fired a rocket past him for his third goal of the year.

Five minutes later, Ovechkin scored his second goal of the night on another Washington power play.

The Capitals’ captain now has eight goals in eight games.

Oshie finished up the game with less than two minutes to go, putting the puck into Vancouver’s empty net on an Ovechkin pass.

The Canucks begin a two-game road swing in Vegas Wednesday before playing the Coyotes in Phoenix on Thursday.