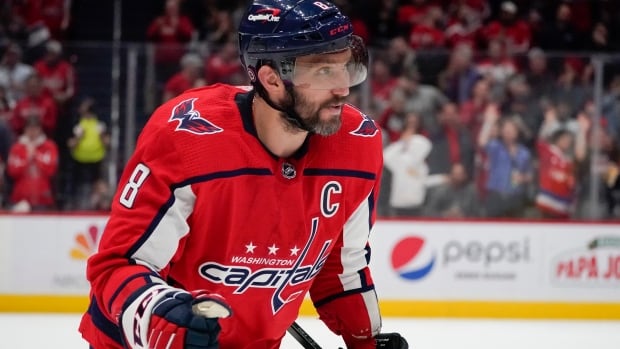 Ovechkin beat fellow Russian Semyon Varlamov for the goal with 4:58 left in the third period of the Washington Capitals’ game against the New York Islanders on Tuesday night. It also broke the tie with Jagr for the most goals scored by a European player in league history.

Ovechkin’s goal put the Capitals up 3-2 and set off a raucous celebration by his teammates, who surrounded him on the ice while the crowd erupted in applause. Chants of “Ovi! Ovi!” followed, accompanied by a standing ovation.

BLINK AND YOU’LL MISS IT <a href=”https://t.co/wHBArGf6Iu”>pic.twitter.com/wHBArGf6Iu</a>

Only Wayne Gretzky and Gordie Howe have scored more NHL goals. Ovechkin needs 35 goals to pass Howe and 128 to break Gretzky’s record that was long thought to be unapproachable in modern hockey.

Islanders forward Mat Barzal isn’t keeping track of Ovechkin’s exact numbers, but he need not look far to see the bright red goal counter in the corner at Capital One Arena.

“That is crazy,” Barzal said of Ovechkin trailing only Gretzky and Howe. “I don’t know the exact number but over 700 goals in this league. He’s a top-five, top-10 player of all time. Pretty cool every time you get a chance to go against him and see him close up.”

Ovechkin scored in the shadow of the Capitals’ 2018 Stanley Cup banner with Barry Trotz standing on the visiting bench. Trotz coached Washington to their first title in franchise history, and Ovechkin was playoff MVP.

“Every time we seem to come and play the Caps, Ovi’s up for another milestone, which is fantastic,” said Trotz, who coached Ovechkin for four seasons from 2014-2018. “The one thing that I’ve learned about Ovi over my time is that when you doubt Ovi or you say he can’t do it, he digs in. He just digs in and is determined on that. And I think over time he’s learned to train probably a little different. It’s pretty amazing.”

A very special congratulations from Jaromir Jagr to Alex Ovechkin (plus a little surprise at the end). 😉 <a href=”https://t.co/HGgSlqRTaQ”>pic.twitter.com/HGgSlqRTaQ</a>

At 36, Ovechkin is three goals away from reaching 40 for the 12th time in his NHL career. That would tie Gretzky for the most 40-goal seasons in history.

“This guy is the greatest goal-scorer of all time, and will be in my opinion until someone else beats him, but [it is incredible] how physical he is and how durable he is,” Trotz said. “It’s not like he goes around quietly and just shoots the puck in the net. He’s running over people. He doesn’t mind contact. He puts himself in dangerous positions, and he’s 36, he’s getting older, you would think that someplace along the line that he would break.”

Ovechkin is showing no signs of slowing down. Still playing top minutes at his age, he impresses 27-year-old linemate Tom Wilson with his seemingly endless energy.

“[Last game] I get to the bench and I’m tired, I’m gassed and he’s like: `Come on, come on, come on. Let’s go,”‘ Wilson recalled. “I’m like, `Holy smokes.’ It draws you into the fight. It pushes you. It’s contagious, for sure. You feel that. There’s nothing better. It’s such a cool thing to be a part of.”

The Capitals have been a part of plenty of milestones during the better part of Ovechkin’s 17-year NHL career. Earlier this season, he passed Brett Hull for fourth — and in previous years there were the 500-, 600- and 700-goal marks.

After Ovechkin tied Jagr last week at Calgary, Nicklas Backstrom started celebrating a night later in Edmonton when his longtime teammate had the puck at close range with half the net empty. Not like Backstrom was worried about Ovechkin passing Jagr taking too long.

“All the milestones that I remember with him, he hasn’t been waiting a long time — just one or two games,” Backstrom said. “He usually does it right away. That’s who he is.”

In a pre-taped congratulatory video message, Jagr joked that Ovechkin better keep scoring because he hasn’t yet retired. Jagr continues to play at age 50 for the team he owns in the Czech Republic.

Ovechkin is under contract until age 40. At his current pace this season, he would need to average 29 goals over the next four years to pass Gretzky before his current deal expires.