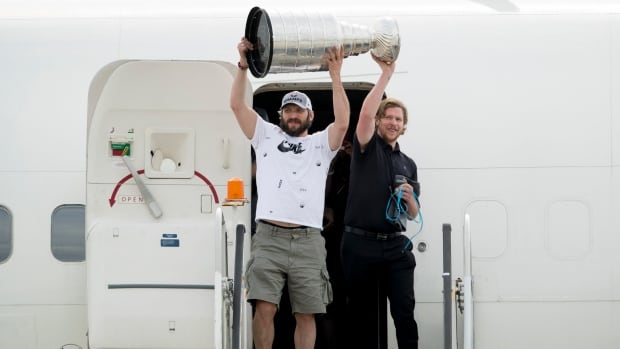 It sure looked as if Alex Ovechkin was slowing down, at least by his standards.

This time a year ago, Ovechkin and the Washington Capitals were limping away from another early playoff exit. His 16 even-strength goals in the regular season tied for the lowest of his career. Injuries limited him to five goals in 13 playoff games.

Then a funny thing happened. Coach Barry Trotz took time from visiting his son in Russia to meet with Ovechkin and talk about changing and evolving his game at age 32. Time doesn’t stop, not even for the greatest goal-scorer of his generation. Trotz and general manager Brian MacLellan wanted more goals, better foot speed and for their cornerstone player to take care of his body to be able to handle more time on the ice.

“That’s just life: You have to change, you have to grow,” Trotz said. “He was motivated to show everybody that he still is a great player in this league.”

Ovechkin led the NHL with 49 goals in the regular season, 15 more in the playoffs as the Conn Smythe Trophy winner and showed in his 13th season he could lead his team to the Stanley Cup. Ordinarily a team would be running out the clock on the final three seasons of a 13-year deal with a player of his age, but now Ovechkin is a Stanley Cup champion and there is no telling how much more the big forward can do in his NHL career.

“Was tough time, but we fight through it and we get result,” Ovechkin said. “It’s just something special. I don’t know. I’m just very excited and I’m very happy right now.”

Alex Ovechkin made a point to hug every teammate, coach and staffer and their family members on the ice after the game. <a href=”https://t.co/Nl6SoosvwF”>pic.twitter.com/Nl6SoosvwF</a>

Hours after the Russian superstar lifted the Cup on the ice in Las Vegas, President Donald Trump devoted his first tweet of the morning to Ovechkin and the Capitals.

“Congratulations to the Washington Capitals on their GREAT play and winning the Stanley Cup Championship,” Trump tweeted . “Alex Ovechkin, the team captain, was spectacular — a true Superstar! D.C. is popping, in many ways. What a time!”

Ovechkin likely hadn’t gone to sleep when the tweet was delivered at 4:12 a.m. Las Vegas time and he retweeted it. Next week, Ovechkin will be the star in a parade down Constitution Avenue six months after Trump on inauguration day and this summer will take the Cup back home to Moscow.

After that, the next challenge starts. Ovechkin last summer adjusted his training methods in Russia, and he seemed rejuvenated when came back to the Washington area.

Now he has to do it all over again with a happily shorter summer.

“As you’re getting older, we’re going to have to train a little different so you become the athlete you always have been, because these young kids can absolutely fly,” Trotz said.

Ovechkin looked like he was flying all season, from seven goals in his first two games to one on the power play Thursday night in the Cup clincher against the Vegas Golden Knights. But goal-scorers don’t typically keep up this pace — Ovechkin was already the oldest player to finish first in goals since Phil Esposito in 1974-75.

Not only did I get to see Tiesto perform tonight, but I saw Alexander Ovechkin bring out the Stanley Cup! Vegas is litty 🤘🏽😫 <a href=”https://t.co/OPYriDzmqg”>pic.twitter.com/OPYriDzmqg</a>

“He was very comfortable and he was very confident,” longtime teammate Nicklas Backstrom said. “He was really calm. Everything was really good. It’s impressive the way he scores goals and the way he worked out there. He was just a machine there in the playoffs.”

Owner Ted Leonsis said recently his only regret about signing Ovechkin to a $124 million, 13-year deal is that it wasn’t longer. With three years left at a salary-cap hit over $9.5 million, Ovechkin has already exceeded the expectations of that monster contract with three Hart Trophies, seven Maurice “Rocket” Richard Trophies and now the playoff success that had long eluded him.

“We worked so hard through all the years and we were together,” Ovechkin said. “It’s just like a dream.”