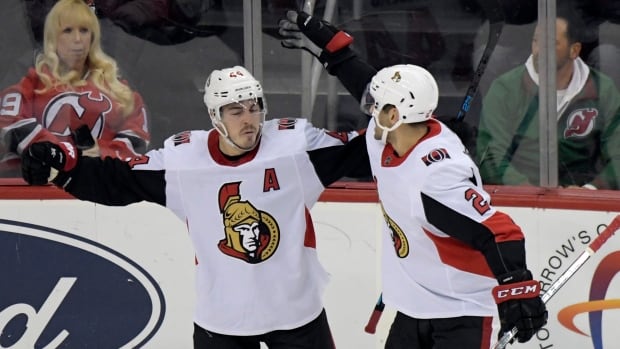 Jean-Gabriel Pageau scored a hat trick, including the game-winning goal with 2:01 to play, and the Ottawa Senators rallied in the third period to beat the New Jersey Devils 4-2 on Wednesday night.

Mark Borowiechi tied the game with 6:30 to go in regulation, and Pageau got the game-winner when he put the rebound of a shot off the post by Nick Paul into an open net. He finished off his first regular-season hat trick with 26 seconds left with a shot into an empty net.

Pageau has eight goals in his last six games.

Craig Anderson made 21 saves for Ottawa, including a breakaway stop on Taylor Hall midway through the third period with the Devils ahead 2-1.

Will Butcher and Wayne Simmonds scored for New Jersey, which returned from a five-game road trip. Mackenzie Blackwood stopped 21 shots.

Borowiecki tied the game 2-all with 6:30 left in the third period on a rising shot from the top of the left circle.

The winner came after Paul, who was stopped twice by Blackwood in the closing minutes, banged a shot off the post. Pageau had nothing but net to shoot at on the rebound.

Blackwood had made tremendous saves in close on Chris Tierney, Brady Tkachuk and Anthony Duclair late in the second and in the first half of the third period to keep New Jersey ahead 2-1.

The Devils took leads of 1-0 and 2-1 in the first period on goals by Simmonds and Butcher.

Simmonds opened the scoring on a breakaway at 4:19. Miles Wood made the pass that sent him in alone on Anderson for his second goal in two games.

Pageau tied it at 14:54 with his ninth of the season. He got the rebound of a bad-angle shot by Connor Brown and stuffed it between Blackwood and the post.

Butcher restored the lead with 2:08 left in the period on a shot from the left dot that glanced off Anderson’s shoulder and into the top corner.