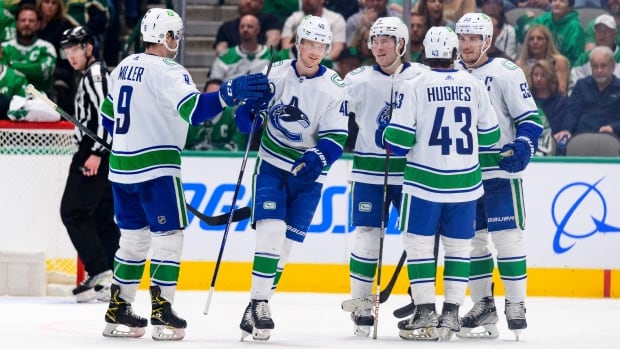 Elias Petterson had two goals and a pair of milestones as the Vancouver Canucks rallied past the Dallas Stars 4-1 on Saturday night in Dallas.

Petterson’s second goal was his 20th of the season and the 200th career point for the fourth-year player from Sweden.

Jacob Peterson scored in the second period, and Jake Oettinger made 27 saves for the Stars.

The Canucks put the game away with two goals in the final 1:06. Horvat scored into an empty net and Garland scored on a rebound of his own shot.

After a scoreless first period, the Stars took the lead on Peterson’s goal at 5:42 of the second. Vancouver tied the score about 10 minutes later when Oliver Ekman-Larsson knocked down a puck in the Vancouver end. Petterson carried the puck to the other end and sent a wrist shot from the right faceoff circle past Oettinger.

On the opening goal, Jamie Benn slid a pass from the right faceoff circle into the slot for Peterson, who went to his backhand and beat Demko with a shot inside the left post.

Vancouver had the game’s first three shots on goal before Thomas Harley appeared to score for the Stars. However, the puck deflected off Demko’s leg and the left goalpost but didn’t cross the goal line. That began a streak of eight shots by Dallas. The scoreless first period ended the Stars outshooting the Canucks 14-9.

The game’s first penalty came at 15:10 of the second period, when Dallas defenceman Jani Hakanpaa went off for holding. Fifteen seconds later, Petterson scored on the power play.