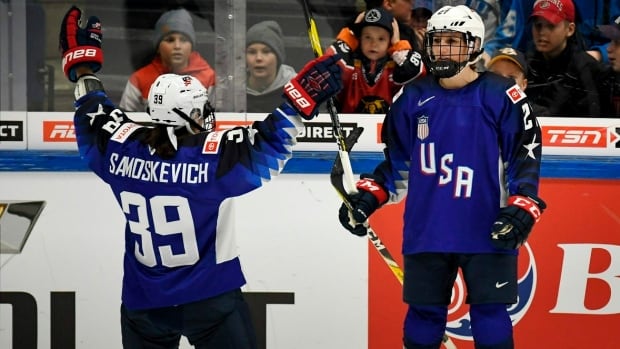 Annie Pankowski scored the winning goal for the United States in a 3-2 win over Canada at the women’s world hockey championship Saturday.

Hilary Knight and Kendall Coyne Schofield also scored for the Americans who were alone atop Group A with six points following the victory.

Canada dropped into a tie alongside Finland and Russia all with three points apiece. Switzerland was winless in two games.

U.S. starter Alex Rigsby made 31 saves for the win in front of an announced 3,502 at Metro Areena.

Brianne Jenner had goal and an assist in her 100th career game for Canada. Sarah Nurse also scored and Brigette Lacquette assisted on a pair of goals.

Emerance Maschmeyer turned away 27 shots in the loss.

Canadian captain Marie-Philip Poulin skated in Saturday’s warmup, but remained on the bench in her gear for a second straight game.

Canada has Sunday off before concluding group play with back-to-back games against Russia on Monday and host Finland on Tuesday.

The Czech Republic moved into first in Group B with six points following a 5-3 win over Sweden. Germany edged Japan 3-2 to get to five points, while the Japanese sat third with three.

The Swedes owned a single point and France was winless in two games.

The tournament is seeded according to world ranking with the top five countries in Group A and sixth to 10th in Group B.

All Group A countries and the top three Group B countries will play quarterfinals April 11. The semifinals are April 13 followed by medal games April 14.

Canada scored both goals with a man advantage Saturday. Canada went 2-for-7 in the game, while the U.S. was 1-for-5.

Canada had a power play with two and a half minutes to play, but it was negated by a Natalie Spooner hooking penalty with a minute remaining.

Pankowksi put a slapshot over Maschmeyer’s right shoulder at 14:03 of the second period for a power-play goal.

Canada drew even on the power play at 1:55 of the second period, when Jenner tipped a Lacquette point shot past Rigsby.

With the speed that set the hockey world abuzz at the NHL all-star skills competition, Coyne Schofield scored on a breakway at 18:13 of the first period taking advantage of a Canadian turnover.

Defender Micah Zandee-Hart fell down handling the puck in the defensive zone. Coyne Schofield was upon her in a few strides for a 2-1 U.S. lead.

Canada’s Nurse got her stick on a rebound for a power-play goal at 6:27. Rigsby couldn’t contain a Lacquette blast from just inside the blue-line.

Knight finished a two-on-one with Dani Cameranesi at 4:41 when the Americans launched from their zone with speed.

After a 1-0 loss to open February’s three-game Rivalry Series with the U.S., Canada won back-to-back games with scores of 4-3 and 2-0.

Seventeen players on Canada’s world championship had at least one U.S. national-team member as a teammate in the CWHL or NWHL this past season.