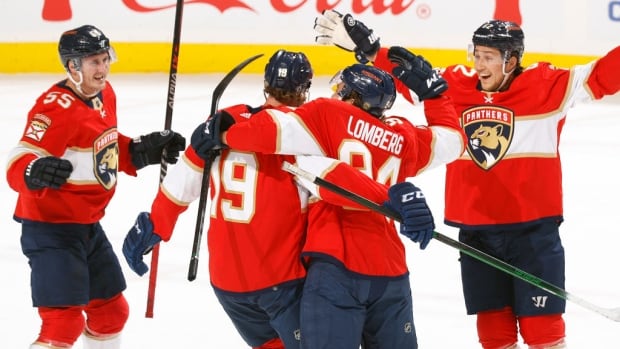 Jonathan Huberdeau and Ryan Lomberg both had two goals and an assist to lead the Florida Panthers past the Montreal Canadiens 7-4 in Sunrise, Florida on Tuesday night.

Sam Bennett and Aleksander Barkov each added a goal and an assist for the Atlantic Division leaders, who are tied with Carolina for the top playoff seed in the Eastern Conference. Both teams have 96 points, though Florida has a game in hand.

Mason Marchment also scored for the Panthers, and Sergei Bobrovsky made 20 saves.

Christian Dvorak, Joel Edmundson and Laurent Dauphin scored in the second period for the Canadiens. Chris Wideman had a goal and an assist, and Jake Allen stopped 39 shots.

Huberdeau’s second goal, a backhander from in front, put the Panthers ahead 5-4 at 1:19 of the third period.

After trailing 4-1, Montreal scored three goals in 1:42 of the second period, including two 31 seconds apart, to tie it.

Edmundson’s shot from the slot went in with 3:36 left in the period to close to 4-2. Dauphin poked in a loose puck 31 seconds later to make it 4-3, and Dvorak scored from the left circle with 1:54 remaining.

Montreal had five shots in the second.

The Panthers stretched their lead to 3-1 when Bennett poked in a rebound at 2:37 of the second.

Lomberg’s second goal put Florida ahead 4-1. Lomberg took a pass from Barkov in the slot and beat Allen at 7:57 of the second.

Florida tied the score 1-all on Huberdeau’s short-handed goal with 3:43 left in the first. Huberdeau took a feed from Eetu Luostarinen in the slot and backhanded the puck into the top of the net.

The Panthers took a 2-1 lead on Lomberg’s shot from the top of the face-off circle with 2:03 left in the first.

Wideman gave the Canadiens a 1-0 advantage when his shot from the slot beat Bobrovsky at 2:32 of the first.