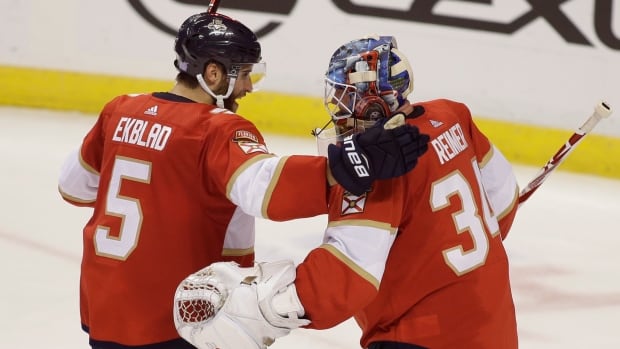 Frank Vatrano, Troy Brouwer and Jonathan Huberdeau also scored, and James Reimer made 33 saves. Reimer started in place of Roberto Luongo, who was given the night off after playing in Saturday’s 4-2 win over the New York Islanders.

Mike Hoffman had two assists and has points in 12 straight games, one short of Pavel Bure’s franchise record of 13.

Ryan Dzingel scored for the Senators, and Mike McKenna stopped 35 shots in his first start of the season. Regular starter Craig Anderson was given a rest after playing in Saturday’s 6-4 win at Tampa Bay.

Barkov sparked Florida’s big second period by making it 1-1 3:05 in, and Huberdeau put the Panthers ahead with a power-play goal about three minutes later.

The Panthers then scored three goals in a span of 3:14. Barkov’s second goal stretched the lead to 3-1 when he grabbed the puck on a breakaway and fired a shot in at 14:57. Brouwer took a pass from Colton Sceviour from behind the net in front and pushed the puck past McKenna at 16:03 to make the score 4-1. Vatrano’s goal at 18:11 made it 5-1.

Dzingel put the Senators ahead 1-0 with a power-play goal late in the first period. Dzingel’s wrist shot from the slot beat Reimer on the glove side.