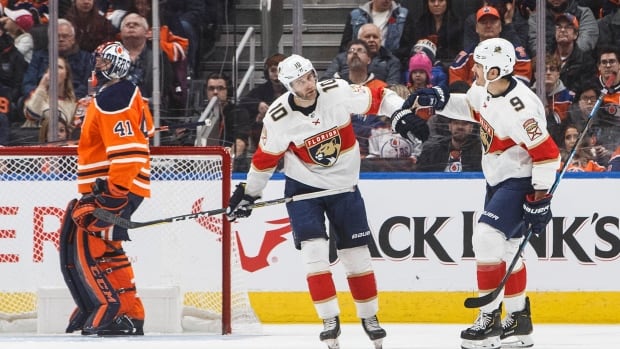 Brian Boyle and Jayce Hawryluk each had a goal and an assist, and the Florida Panthers scored three goals in just over two minutes to open the second period in a 6-2 victory over the Edmonton Oilers on Sunday.

Aaron Ekblad, Noel Acciari, Evgenii Dadonov and Frank Vatrano also scored for the Panthers (5-2-4), who have earned at least a point in eight straight games.

James Neal and Leon Draisaitl responded for the Oilers (8-3-1), who have lost three of their last four games while dropping to 5-1-0 on home ice.

There was no scoring in the first period. The Panthers put nine shots on Oilers goalie Mike Smith as Edmonton sent seven shots on Florida starter Sergei Bobrovsky.

The Panthers broke the deadlock 31 seconds into the second period as Aleksander Barkov dropped it back to Ekblad, who beat Smith glove side for his first goal of the season.

Florida added to its lead just over a minute later when a defensive miscue led to Boyle waiting for Smith to commit before sending the puck into the net.