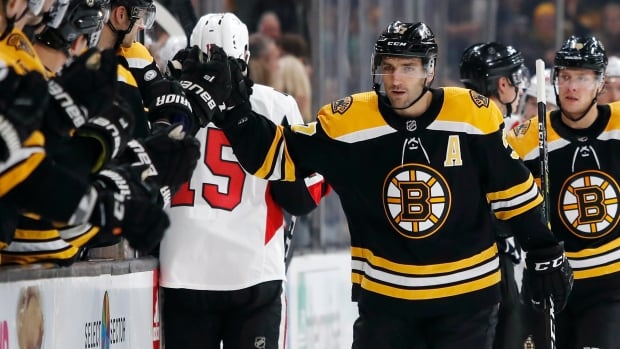 Patrice Bergeron had a hat trick, scoring his first just 30 seconds into the game, and Tuukka Rask stopped 28 shots to earn his first win of the season while leading the Boston Bruins to a 6-3 victory over the visiting Ottawa Senators on Monday.

Bergeron also had an assist, David Pastrnak had two goals and two assists and Charlie McAvoy had his first career three-assist game for Boston.

Brad Marchand picked up his fifth, sixth and seventh assists in three games so far this season, and Chris Wagner also scored for the Bruins in their home opener.

It was their fifth straight victory over Ottawa and their second straight win this season since losing the opener 7-0 to the Washington Capitals on the night they raised their Stanley Cup championship banner.

Ryan Dzingel scored twice for the Senators, who picked up a 5-on-3 power play with about 12 minutes left but failed to score. Mike Condon made 24 saves for Ottawa.

The 2014 Vezina Trophy winner, Rask was pulled from the opener against Washington after allowing five goals on 19 shots in less than 28 minutes. Backup Jaroslav Halak replaced him and also started the second game, a 4-0 win over Buffalo on Thursday.

Rask was spotted a 2-0 lead in Monday’s matinee, thanks to Bergeron’s goal off a rebound in the crease in the first minute. The Bruins forward also scored on a power play from the right faceoff circle with three minutes left in the first.

It was 3-2 after two periods when Bergeron scored off Ottawa defenceman Cody Ceci’s knee 4:38 into the third, sending a shower of caps onto the ice. Pastrnak made it 5-2 with 3 1/2 minutes left, but Bobby Ryan cut the deficit back to two goals just 30 seconds later.

Pastrnak added an empty-netter from mid-ice.