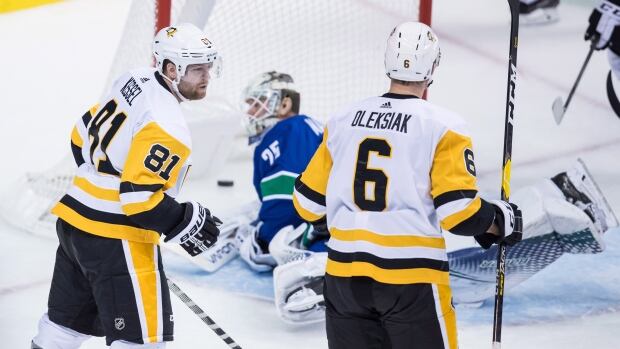 Evgeni Malkin scored twice and registered an assist, leading his Pittsburgh Penguins to a 5-0 victory over the Vancouver Canucks on Saturday.

Sidney Crosby also tallied a pair of goals and Phil Kessel had one of his own.

The win completes a clean sweep for the Penguins on their four-stop Canadian road trip. The club also grabbed victories in Toronto, Edmonton and Calgary.

Pittsburgh netminder Casey DeSmith stopped all of the 29 shots he faced on Saturday for his second NHL shutout.

The 27-year-old backup previously registered a clean sheet against the Ottawa Senators on April 26.

Despite the loss, Markstrom kept his squad in the game with several clutch saves, including in the first period when the goaltender sprawled to make a left-skate save off a rocket from Malkin.

The Penguins opened the scoring midway through the second frame, following a patient move by Olli Maatta. The defenceman had been waiting for a chance at the point and fired off a shot that bounced off Markstrom’s pads. Kessel snuck around the back of the net and found the rebound, banging it in for his seventh of the year. The right winger leads the Penguins in goals.

Crosby tallied Pittsburgh’s second goal later in the period, collecting the puck in front of the net and putting a backhanded shot in past Markstrom.

The centre’s first marker came off a saucer pass from right winger Daniel Sprong, which he quickly buried in the side of the net.

Less than a minute later, Malkin again found the puck in front of the Vancouver goal and sliced it in past Markstrom.

Crosby capped the scoring with just over two minutes to go in the game, firing a slapshot in from the side of the net.

The Penguins’ captain now five goals and three assists during a four-game streak.

One bright spot for the Canucks in Saturday’s loss was the return of two of the team’s marquee forwards.

Right winger Brock Boeser had missed two games with a groin injury, while centre Elias Pettersson had been sidelined with a concussion after he was hit by Florida defenceman Mike Matheson on Oct. 13.

Boeser has put up six points in nine games and Pettersson has registered five goals and three assists in his first five NHL outings.

Vancouver head coach Travis Green had the pair skating together on a line with Nikolay Goldobin for much of Saturday’s game. The trio combined for six shots, but couldn’t find the back of the net.

The Canucks’ loss means Vancouver and Pittsburgh split their season series. Vancouver took the first round on Oct. 16 when Boeser scored 34 seconds into overtime for a 3-2 win.

Saturday’s game was the first in a four-game homestand for the Canucks. They’ll be back at Rogers Arena on Monday to take on the Minnesota Wild.