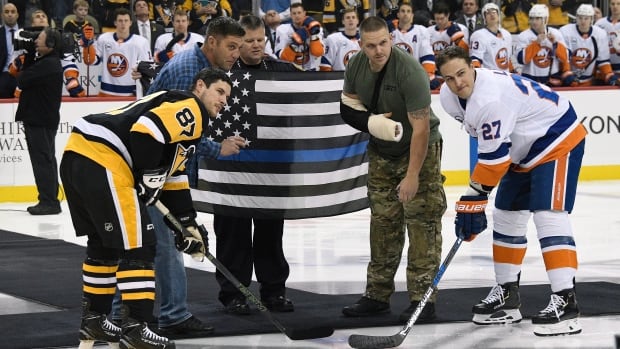 The Penguins held a ceremony Tuesday to honour the victims of Saturday’s synagogue shooting in the Pittsburgh neighborhood of Squirrel Hill.

Two Pittsburgh police officers participated in the ceremonial face off prior to the Penguins game versus the Islanders. The two officers were injured while responding to the attack on the Tree of Life synagogue on Saturday. 1:28

The team held an 11-second moment of silence prior to a game against the New York Islanders in memory of the 11 lives lost in the shooting at the Tree of Life synagogue. Penguins players wore a special “Stronger than Hate” patch, which incorporated the team logo and Star of David, and the Islanders wore a similar decal on their helmets.

A black and white silhouette of the city with the words “Stronger than Hate” flashed on the scoreboard during the pregame ceremony, while a video tribute played prior to faceoff. A ceremonial puck drop featured Pittsburgh police Chief Scott Schubert along with Anthony Burke and Mike Smigda, officers wounded in the attack.

Professional sports team around the globe paid tribute to those who died and were injured in Saturday’s attack on a Pittsburgh synagogue. 0:58

The Penguins’ jerseys were signed and will be auctioned in an effort to raise money and support victims and families of the shooting. The team also held a blood drive and donated to the Jewish Federation of Greater Pittsburgh and a fund established by the City of Pittsburgh Department of Safety to benefit police officers wounded in the attack.