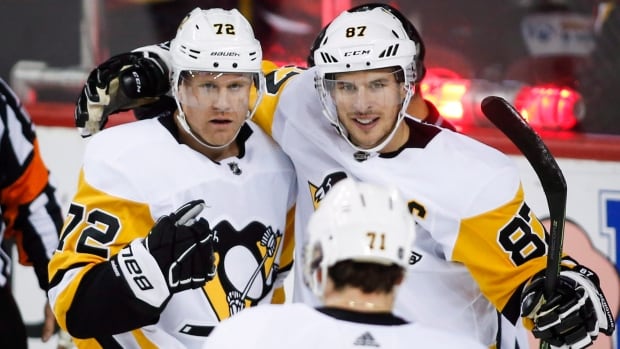 The Pittsburgh Penguins scored a lot of goals in Alberta — 15 in two games to be exact.

Patric Hornqvist and Phil Kessel each scored twice for Pittsburgh in a 9-1 blistering of the Calgary Flames on Thursday, which came just two days after a 6-5 overtime win over the Edmonton Oilers.

“I think that just speaks to the talent we have in here,” Penguins goaltender Matt Murray said.

“When we come with our ‘A’ game it’s hard to stop. You look around our lineup and it’s pretty clear why we score that many goals.”

After winning 3-0 in Toronto, the Penguins (5-1-2) spent a few days in Banff, Alta., before facing the province’s NHL teams.

Crosby theorized the Banff break and a relatively leisurely schedule on this road trip has kept Pittsburgh’s goalscorers fresh.

“It was good that we got out here fairly early to get our feet under us, time change and all that stuff,” the captain said. “Banff was a great trip, it’s beautiful there and we had some good practices.

“It was good we didn’t have to deal with back-to-backs. Usually you’re dealing with a back-to-back at some point out here. We get to play every second day and get some rhythm.”

The Pens face the Canucks in Vancouver on Saturday.

Murray repelled 38 of 39 shots for the win. Evgeni Malkin had a pair of assists to extend his point streak to six straight games (two goals, 10 assists).

Calgary starter Mike Smith was pulled for David Rittich midway through the second period after allowing six goals on 21 shots. Rittich turned away 12 of 15 shots.

Four previous games between Calgary and Pittsburgh had either gone to a shootout or overtime.

But the visitors put on a goal-scoring clinic with tip-ins and tenacity on rebounds, as well as scoring on both power-play chances Thursday.

The Flames (5-5) were booed at Scotiabank Saddledome after the second period when they trailed by a converted touchdown, and after the buzzer.

“They scored a few and we started taking some risks that obviously you can’t take against a team like that who knows how to put the puck in the net,” Flames captain Mark Giordano said.

“It really snowballed and a lot of us in here, it’s a tough feeling. I don’t think many of us have been through that, especially in your own building.”

“I feel like our past few games haven’t been good at all. Tonight, it’s time to sit down with each other and figure this out.”

After his show-stopping overtime winner Tuesday in Edmonton, Crosby got his team out the gates whipping a sharp-angled backhand between Smith’s left shoulder and the crossbar at 4:23 of the first period.

“He’s one of the best players not just shooting with his backhand, but playing on his backhand,” Pittsburgh coach Mike Sullivan said.

“He makes plays and can shoot the puck and for the goaltender it’s really tough to pick up where the puck is going on a backhand shot. Not only is it deceptive, but it’s hard.”

The Flames are at home to the Stanley Cup champion Washington Capitals on Saturday afternoon before a two-game road trip to Toronto and Buffalo, N.Y.