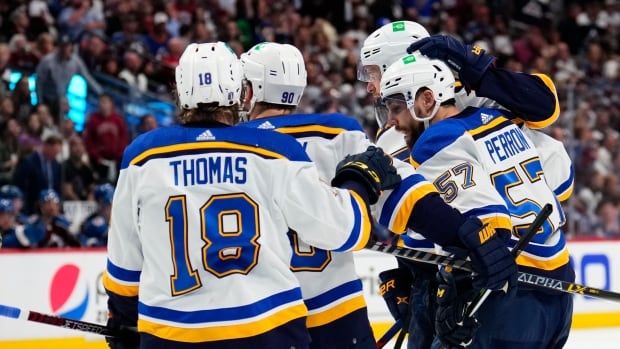 David Perron scored twice as St. Louis switched up its line combinations, Jordan Binnington made 30 saves and the Blues beat the Colorado Avalanche 4-1 on Thursday night to tie their second-round series at a game apiece.

Jordan Kyrou added a goal and Brandon Saad sealed it with an empty-netter for the Blues as they rode another stellar performance from Binnington. The Blues goaltender stopped 51 shots during a 3-2 overtime loss in Game 1.

Binnington’s flashing his 2019 form, when as a rookie he led the Blues to a Stanley Cup title with a 16-10 mark and a 2.46 goals-against average.

Gabriel Landeskog scored on a power play early in the third for Colorado to make it 2-1. But Perron answered right back with his seventh goal of these playoffs.

Darcy Kuemper stopped 28 shots. Two of the goals he allowed were redirected off the stick of a defenceman.

Nathan MacKinnon and the Avalanche found open ice a scarce commodity against a physical, hard-checking and more determined Blues squad.

Game 3 is Saturday in St. Louis.

Among the line changes by the Blues was pairing Pavel Buchnevich with Ryan O’Reilly and Perron.

“Move some guys around to see if we can create some balance throughout our lines,” Blues coach Craig Berube explained.

All the line switches worked. Buchnevich finished with two assists.

The Blues had a 5-on-3 advantage late in the second period when Devon Toews was called for tripping and Valeri Nichushkin for goaltender interference after slamming into Binnington, whose stick went flying.

Perron made them pay when his liner deflected off the stick of Josh Manson — who scored the OT winner in Game 1 — and past Kuemper.

Earlier in the second, Kyrou’s shot deflected off the stick of defenceman Samuel Girard and over the shoulder of Kuemper.

Colorado defenceman Cale Makar was shaken up late in the first period when he fell to the ice and hit his leg on the post, knocking the goal off its moorings. He gingerly skated to the bench, but was back on the ice after intermission.

The Blues mixed up their line combinations for Game 2, but it was the defencemen generating most of the early shots. Of the 14 shots they had in the first period, eight were from the defence.

Colorado has been ousted from the playoffs the last three seasons in the second round.

The stunning finish put the Lightning up 2-0 in the best-of-seven series that heads to Tampa for Game 3 on Sunday.

The game appeared headed for overtime before Colton scored from right in front of goaltender Sergei Bobrovsky off a backhand pass from Nikita Kucherov, who chased down a loose puck behind the Florida net.

Perry’s goal was the Lightning’s fourth in seven power-play chances to start the series.

The Panthers scored the third-most power-play goals during the regular season, but entered the second game of the series 0 for 21 in man-advantage situations through seven postseason games. They were 0 for 4 Thursday night, with the team’s lone goal coming on a 30-foot shot from Eetu Luostarinen that trickled past Andrei Vasilevskiy with 1:53 remaining in the second period.

Florida got its third power-play opportunity in the final minute of the second period and had a couple of good looks, but still went into the break tied. The Panthers also got another chance in the closing minutes of the third, but came up empty again.

Vasilevskiy stopped 34 of 35 shots for Tampa Bay. Bobrovsky finished with 25 saves, including a couple of big ones that kept the Lightning from breaking a 1-all tie earlier in the third period.