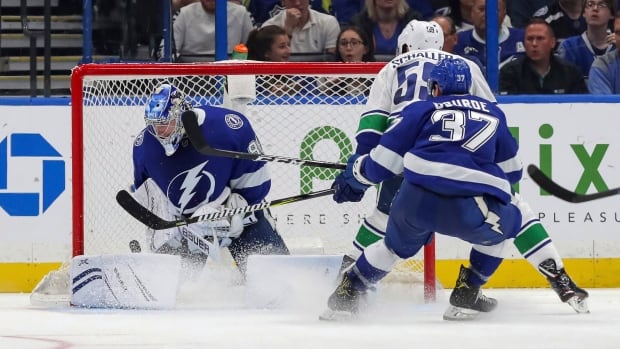 Elias Pettersson and Brock Boeser scored 1:10 apart in the third period and Jake Virtanen and Markus Granlund added empty-net goals in the Vancouver Canucks’ 4-1 victory over the Tampa Bay Lightning on Thursday night.

Pettersson scored his fourth goal in four games in his rookie season. Anders Nilsson made 33 saves in his season debut.

Brayden Point scored his first goal of the season for the Lightning, and Andrei Vasilevskiy made 24 saves.

Vancouver withstood an early surge to keep the game close, trailing by a goal entering the third period. The persistence was rewarded first when defenceman Derrick Pouliot threw a wrist shot toward the net from the top of the left point that Pettersson was able to deflect around Vasilevskiy and inside the post with 8:53 remaining. Boeser then fired a slap shot from the right circle past Vasilevskiy.