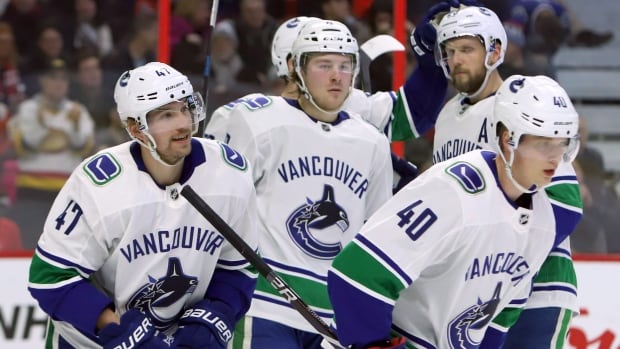 Elias Pettersson scored his third goal of the night in overtime to lead the Vancouver Canucks past the Ottawa Senators 4-3 on Wednesday night.

Earlier in the day, Pettersson learned he would represent the Pacific Division at the upcoming NHL all-star game.

Sven Baertschi also scored for the Canucks (20-19-4), who are playing the fourth of a six-game road trip. Jacob Markstrom stopped 30 shots for the win.

Matt Duchene, Christian Wolanin and Mark Stone scored for the Senators (15-21-5), who are now mired in a six-game losing streak. Marcus Hogberg, making his third straight start, made 41 saves.

Leading 2-1, the Canucks kept the pressure right from the start of the third.

Hogberg made a great stick save on Brock Boeser, but was unable to stop Pettersson as he scored his second on the power play at the five-minute mark.

Ottawa made it a one-goal game midway through the period as Wolanin scored his first of the season. The Senators pressed for the equalizer and scored in the final minute of regulation as Stone scored from in close to set up Petterson’s overtime heroics.

The second period was much like the first as Hogberg was kept busy, but the Canucks were finally able to solve the young netminder with a power-play goal. Hogberg stopped Alexander Edler’s point shot, but Baertschi was left alone in front to put in the rebound.

Ottawa tied the game at the 12-minute mark as Duchene jumped on a Bobby Ryan rebound, but three minutes later the Canucks regained the lead.

Pettersson started the sequence with a drop pass and took a great feed from Brock Boeser to finish it with his team-leading 20th of the season.

A scoreless first period saw the Canucks outshoot the Senators 17-5.

Hogberg made a number of big saves including stopping Jake Virtanen from in close midway through the period.

Ottawa’s best chance came in the dying seconds of the period on a two-on-one, but was unable to capitalize.