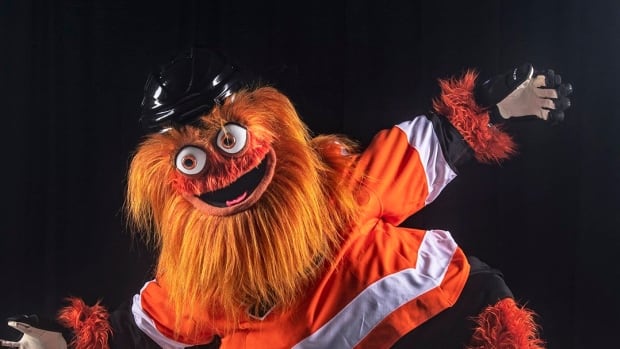 The Philadelphia Flyers unveiled their new mascot Monday, and as one would expect of the team that gave us the “Broad Street Bullies,” he’s far from cuddly.

“Gritty” is a hulking Neanderthal-like figure with a pot belly, an orange mountain-man beard and two huge, lidless googly eyes. Think Montreal Canadiens mascot “Youppi!” after a triple espresso and four cans of Red Bull, and you get the idea.

The intense, even frightening figure flies in the face of the NHL’s more kid-friendly mascots, like Toronto’s good-natured polar bear “Carlton” or Calgary’s lovable “Harvey the Hound.”

According to a release form the Flyers, “Gritty” was forced out of a hermit-like existence when construction at the Wells Fargo Center disturbed his secret hideout. His bio also describes him as “the ultimate Flyers fan” and “loyal but mischievous,” with a penchant for eating snow left behind by the Zamboni ice-cleaning machine.

Others decided pictures (or GIFs) would speak volumes:

And judging by the amount that were simply GIFs of fright and terror, the orange and black seemed more akin to Halloween than the Flyers team.

Some users also called out the uncanny resemblance to “Animal” from The Muppets:

– with files from Canadian Press