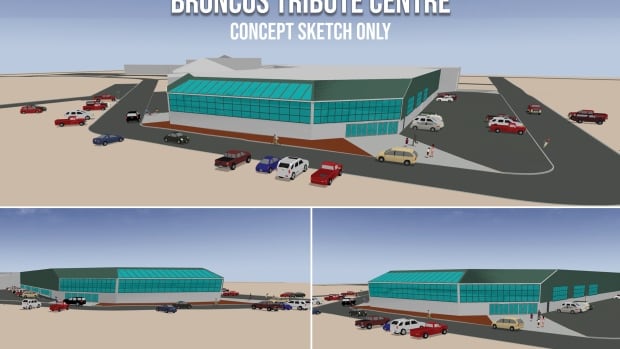 A $25-million tribute centre is being planned to honour the victims of the Humboldt Broncos bus crash.

Tuesday marks the three-year anniversary of the crash, which killed 16 people and injured 13 others.

City and team officials unveiled a blueprint for the tribute centre Monday at a news conference. It will include a gallery, an ice surface and a physiotherapy area.

“We’re really looking forward to this as a next step in the healing process.” Humboldt’s deputy Mayor Rob Muench said.

Organizers say $25 million is an initial estimate of costs, and that could change as the project advances. They say a host of companies and individuals have already pledged to help in any way they can.

Kurt Leicht, whose son Jacob was one of those killed, said his family has received tremendous support over the past three years, and is heartened that Jacob’s memory will live on through the tribute centre.

Carol Brons, whose daughter Dayna was also killed, said she hopes the centre will serve as an inspiration for others to make positive change in their own communities.

Others noted this is not the only legacy of the victims and their families. Thanks in large part to the lobbying efforts of families, safety improvements have been made at the intersection where the crash occurred.

Training is now mandatory across Canada for semi-trailer drivers. Rules and attitudes have also changed around organ donation.

Tuesday at 4:50 p.m., an online memorial service will be held to mark the third anniversary of the crash.

There will be photos of the players and staff, as well as an online museum displaying what they call the “outpouring of gifts of love and support” that have been sent in the past three years.