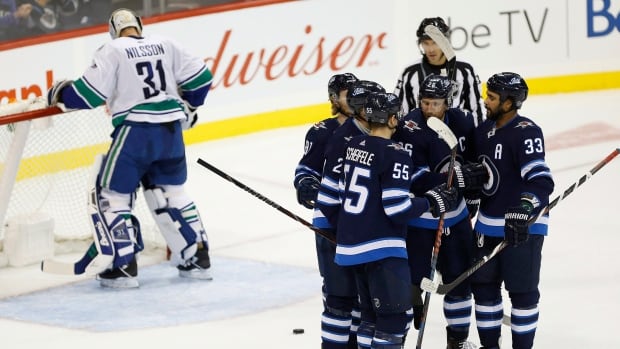 Patrik Laine and Bryan Little each scored power-play goals as the Winnipeg Jets defeated the Vancouver Canucks 4-1 on Thursday.

Dustin Byfuglien had a goal and two assists for Winnipeg (4-2-1), while Andrew Copp added a single.

Connor Hellebuyck made 26 saves for the Jets, who were playing the third game in a season-long six-game homestand (2-0-1).

Bo Horvat scored for the Canucks (4-3-0), who had their win streak end at three games.

Byfuglien’s three-point outing came in his first game back after missing two with an upper-body injury.

Little broke a 1-1 tie when he scored at 4:58 of the third period with a backhand shot that beat goalie Anders Nilsson. He also picked up one assist.

Laine beat Nilsson with a one-timer late in the first period. Copp made it 3-1 with 7:14 left in the third and Byfuglien scored his first of the season at 14:43.

Winnipeg led 1-0 after the first period and Vancouver tied it up in the second.

Laine scored with 64 seconds remaining when Blake Wheeler sent a pass across the front of the net for the Finnish shooter’s one-timer that beat Nilsson on the stick side.

It was Wheeler’s 500th point with the Jets franchise, second behind Ilya Kovalchuk during his time with the Atlanta Thrashers.

After being outshot 7-1 by the visitors six minutes into the first, Winnipeg ramped it up and had an 11-8 edge at the end of the opening period.

Horvat scored his fourth goal of the season on a great effort to get around Winnipeg defenceman Jacob Trouba, hang on to a bouncing puck and shoot it past Hellebuyck at 12:54 of the second.

Shots on goal were even 20-20 after the middle frame.

Vancouver continued a power play to start the third period, but weren’t successful on their second man advantage in the game. Winnipeg was 2 for 2.

After giving his team the 2-1 lead at 4:58, Little hit the post. Copp then scored his first goal of the season when he banged in a bouncing puck in the crease at 12:45 and Byfuglien sealed it with 5:17 remaining.

Winnipeg hosts Arizona on Saturday and Vancouver takes on the visiting Boston Bruins the same day.