Police in Franklin, Tenn. arrested him mid-June. They say he assaulted his girlfriend at a gas station. The two argued and Watson admitted to pushing the woman, police say.

She gave birth to their child back in April.

While she had asked for a dismissal of the case, the prosecutor say they proceeded with the case because there were witnesses.

The 26-year-old entered a no contest plea on Tuesday to the misdemeanor domestic assault charge. 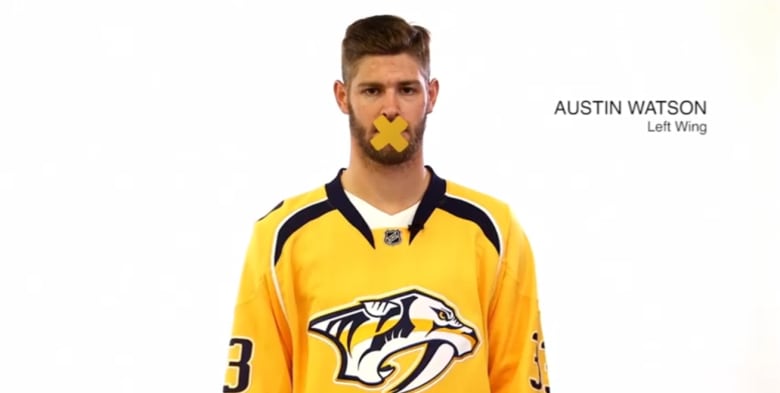 Nashville Predators made a $500,000 donation to an organization whose mission is ending violence against women and girls. The team appeared in a video saying it’s time to break the silence last January. (Nashville Predators)

As a result of the plea in Williamson County General Sessions court, Watson received three months of probation and is required to complete a 26-week batterer prevention course.

If he violates probation, he could spend up to one year in jail. If Watson abides by all the stipulations, the charge will be removed from his record.

Watson was a first-round pick in the 2010 draft and signed a three-year, $3.3 million contract a year ago. He scored a career-high 14 goals in the 2017-18 season. Watson split his junior hockey career between Windsor, Peterborough and London.

Last year, Watson appeared alongside other Predators players in a video calling for an end to domestic violence.